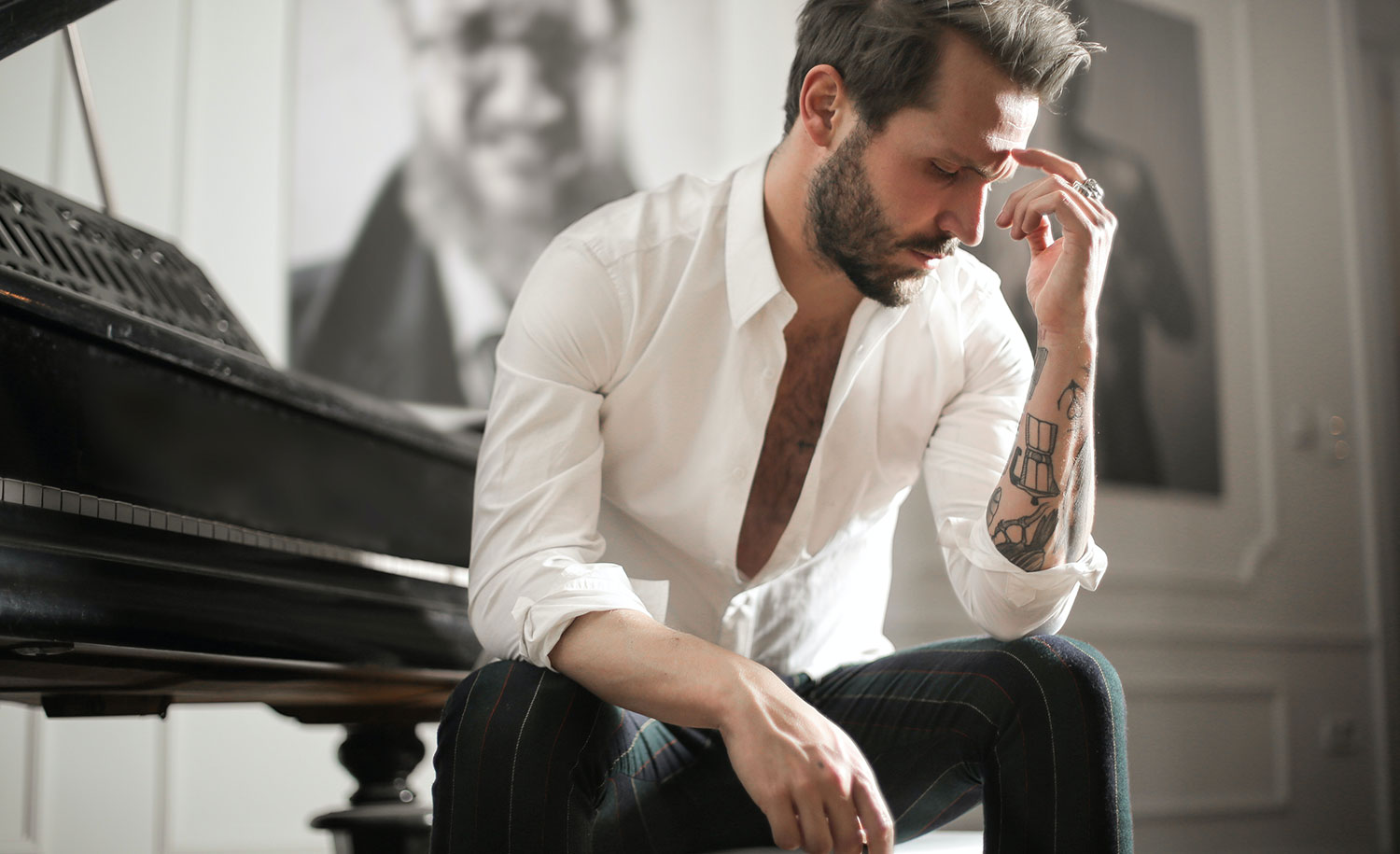 The INFJ’s intensity is like a slow-burning flame, gradually burning up the heavy pieces of charcoal in a grill, but in intense heat.

The INFJ is one of the eight introverted Myers-Briggs personality types, making up roughly 1-2 percent of the population. “INFJ” is an acronym which stands for Introversion (I), Intuition (N), Feeling (F) and Judging (J). These four core characteristics describe the way this personality type navigates through life.

With their empathy and warm listening skills, they will make you feel so relaxed that you’ll tell them your deepest secrets after first meeting them — they also seem to have a pervasive enigmatic intensity. For example, their intense daydream stare into the vast sky, which will make you wonder which planet they will take off to next. However, despite its allure, this intense side can be overwhelming to others who interact with the INFJ.

INFJs themselves are often also strongly affected by it, as it has a huge impact on how they live their lives. Curious about why INFJs can be intense? Let’s look at five reasons.

5 Reasons Why INFJs Can Be Intense

1. INFJs have an insatiable curiosity.

One thing we know for certain is that INFJs like to know things — their minds can be extremely curious and they let that curiosity take them anywhere really. The INFJ is often very much interested in substantial topics, particularly abstract and paradoxical topics that you can’t really figure out in a day (or even weeks or months). Often, they’re about psychology, philosophy, ethics, arts, or even complex technical sciences, like computer science or engineering. One does not exclude the other.

The INFJ’s curiosity is like a fire that only concerns itself with the biggest charcoal briquettes at the bottom of the barbecue. A slow-burning fire, gradually burning up the heavy pieces of charcoal, but in intense heat.

All of the above makes INFJs intense because they’re always learning, diving into those heavy topics all at the same time. It’s not uncommon for them to be reading a few books at once, for when something grabs their interest, it is like they are under a spell. The enthusiasm that awakens when interesting novel ideas and beautiful concepts strike them has led to countless sleepless nights.

They immerse themselves in the subject matter and aren’t satisfied until they understand its core. So they feed their minds daily only to be satiated after absorbing a subject’s essence. They’ll read books and articles or watch videos on the topics and think deeply about their underlying principles over and over (and over) again.

However, an INFJ has to be careful when they are in the midst of these frequent knowledge binge modes due to the sheer intensity of them (especially when a few are happening at the same time) — it has led to burnout for many. For instance, when I started my blog, I knew nothing about websites or blogging — and I was very excited about it and wanted to learn. So I built my website while learning about all aspects of websites and blogging, which led to an intense month in which I spent 16 hours a day doing this.

I was so immersed that I even forgot to eat. I just couldn’t stop because I was so engaged — until my body let me know I needed to take a break. Right after the website was finished and live, I was burned out and unable to do any concentrated work longer than 30 minutes. The INFJ’s curiosity is no joke. Sound familiar?

2. INFJs feel they have little time in this life.

Time… Time is everything, to everyone. “Life is short,” they say, so live it to the fullest. Something we all understand deep down on a certain level, right? INFJs are highly likely to have a peculiar relationship with time, as well. As discussed in my article on 5 common INFJ male problems, many times, INFJs are late bloomers.

Figuring out our paradoxical nature is already a handful, let alone exploring how to fit our unconventional personality in society in such a way that we remain true to our INFJ selves. When we finally have a little understanding of who we are and build some courage to truly own that, we might already be in our late twenties or thirties. INFJs can be intense, because as late bloomers, we tend to feel we have little time in this life.

Others can feel this intensity, too — we talk a lot about the concept of time and in the way we live our lives. As we mature and gradually surrender ourselves to our dawning understanding of our innate INFJ needs for self-expression, beauty, autonomy, and harmony, we get a glimpse of how absolutely precious and miraculous life can be. Tending to those needs gets us deeper into that realization, which leads to two more epiphanies.

One, that we were actually suppressing those needs for most of our lives, because of shame or trying to fit in. Two, that if we want to reach our dreams and goals that come out of those needs, we need to give it everything we have, starting today. So the later part of the INFJ’s life’s journey often becomes an intense attempt with an unwavering devotion to make up for lost time and reach the blissfulness of life we’ve had glimpses of.

Aside from love and an INFJ’s relationship needs, our aspirations and visions are strongly powered by a visceral existential knowing of the impermanence of all life. Luckily, there’s still time to shine our light! If not now, then when? Let’s start now!

3. INFJs tend to be focused on the deeper side of things.

Always trying to understand everything fully and grasping something’s essence is a beautiful thing. Digging deeper for the underlying principles of interesting intellectual concepts, and the essence of novel creative ideas, is like a treasure hunt for the INFJ.

But our ardent minds tend to look for treasure even in places where it perhaps can’t be found. We might try to find a deeper meaning in something that just plainly hasn’t any. That’s why the INFJ can be seen as intense, because they seek deeper meaning in everything.

An example might be coworkers who talk to an INFJ and say that they feel a bit sad today. A classic INFJ reaction would be to tirelessly question and speculate about the reasons they’re feeling sad. According to the INFJ, it might be some hidden trauma from childhood that’s still haunting the coworker, and the reason they disclose this to the INFJ is that the coworker thinks the INFJ is good at reading people. They think the INFJ should quit their current job as a salesperson and become a psychologist, which the INFJ was already thinking anyway…

INFJs easily fall into their own versions of superstition. In actuality, the coworker is just sharing feeling sad. Nothing more to it. However, the INFJ’s relentless digging for deeper meaning in everything can be experienced as intense by other personalities. Especially if those personality types aren’t typically wired to concern themselves so much with existential concepts that are often frightening to think about (life and death). But to the INFJ, understanding underlying principles (or the nature of phenomena) is important, in order to be able to expand their intuition. For them, only going by surface-level facts doesn’t provide that.

As idealists, INFJs striving for the most ideal situations often struggle with perfectionism. INFJs often approach situations and projects in a holistic way, meaning that they consider many aspects of something and try to make sure everything is right. However, because they want everything right, it can be quite paralyzing. Not only due to this being very hard and practically impossible of course, but also because of the metaphorical mountains the INFJ then sees ahead.

For instance, they might want to start to learn to play an instrument, like the piano, because they love how it enables them to express themselves. Inspired by a great pianist they saw on television or YouTube, they aim to be able to play close to the same level of that pianist. At the same time, they think to do everything right, they must first learn all of music theory.

Their perfectionism makes them learn about all the different chords and the endless possibilities, wanting to know the most beautiful chord progressions from the start. This might take months before they actually start playing the piano. Now, of course, this is a thorough approach, but it prohibits INFJs often from just starting casually and having fun with what they actually want to do as they go.

If anything, you don’t need to be a brilliant pianist to enjoy expressing yourself playing the piano. Nor does anyone expect you to. Their perfectionism can unwarrantedly sentence them to loads of (often unnecessary) work. It unjustifiably complicates things that just simply aren’t complicated.

You can see that if one applies this approach to almost anything, it can be quite discouraging to even start something new, due to it always being preceded by a tedious research phase. Being thorough is a great thing, but we INFJs need to get out of our ceaseless minds and into our bodies more by just starting our projects and learning as we go!

5. INFJs let their intuition guide them.

As strong thinkers and also strong feelers, INFJs make decisions heavily based on their feelings. They do things that tend to feel right to them on a deeper level. The INFJ might be trying to decide whether it’s a good idea to take a certain job. When factual knowledge like salary, benefits, and other pros and cons add up to a positive sum, the INFJ’s feelings are decisive.

For instance, when we as INFJs take in the information of the job description, our bodies start to radiate warm feelings of enthusiasm from deep inside. It is as if we are suddenly immersed in a nice warm bath. We then know on a feeling level that it is the right thing to take the job.

Making decisions based on such intuitive feelings might make our social circle think we are recklessly taking huge risks. However, as INFJs, we often understand the difference between impulsive decisions and this intuitive knowing that guides our lives. To us, it would be actually reckless to let our decisions be guided solely by our rational minds!

The INFJ’s intensity is a huge part of our charm! Learn more about our INFJ nature on my blog, infjmalepsychology.com.

An INFJ male and highly sensitive person (HSP) in my 30s. As a psychologist, scientific researcher, and human being, I aim to blend the objective, subjective, mind, body, and spirit for a holistic view on true well-being. Let’s explore together: INFJMalePsychology.com.