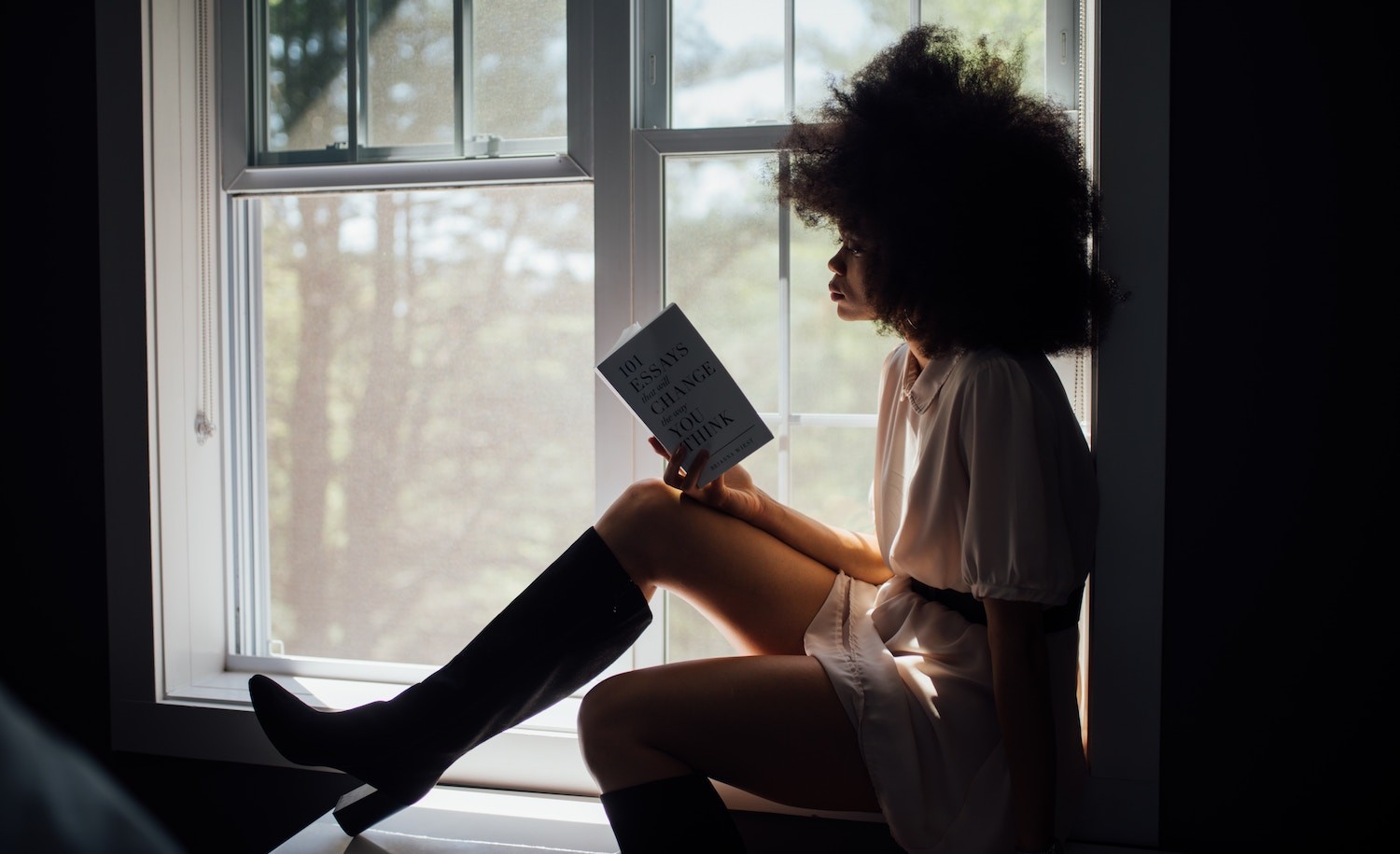 One of the great privileges of reading a book or watching a movie or show is relating to a character. How amazing is that feeling of seeing yourself — your personality, your very soul — reflected in art? It’s that sense of “I belong” and “I’m not weird” and “I’m not alone” that many of us seek in the stories we consume. While we enjoy the thrills, the adventures, the fantasy of fiction, we also crave the solidarity and feeling of connection those relatable characters give us.

I think we all deserve that feeling.

Representation is important, and as an introvert, it’s easy to feel underrepresented. The outgoing, sociable extrovert is frequently the hero in popular movies and books — just look at some of the iconic heroes throughout film’s trajectory: Iron Man, James Bond, Jack Sparrow, Princess Leia, Regina George, and Daenerys Targaryen.

I’m not saying there aren’t great introverted characters (Atticus Finch, Batman, Bran Stark…), but it’s still a big deal when I see an introverted one, and that’s because they’re the minority. Of the Top Ten Highest Grossing Films of 2018, only one film featured a protagonist who is arguably an introvert (the Grinch!).

How many times do the quiet, shy characters get the screen — or page — time they deserve, not to mention their introversion being celebrated or appreciated?

On the occasion when I have encountered a well-written introverted character, I always rejoice because it sends a message straight to my heart. It tells me that my personality is not wrong. It proves to me that I have a right to be quiet, or thoughtful, or whatever the heck I want to be, because those qualities are worthy.

So, here are four fictional introverts who make me feel seen.

Many introverts relate to Jane Eyre. As an INFJ, one of the 16 Myers-Briggs personality types, I do too, even though I believe Jane is best described as an INFP.

There’s the fact that she’s incredibly strong-willed, idealistic, and self-reliant. Her emotional maturity, honesty, and reliance on her own intelligence and capabilities keep her going despite the abuse leveled at her throughout her childhood. Yet she never stops believing in a better life. She has hope. She treasures her idealism. That’s an integral part of my personality, too. In fact, as an INFJ, I cling to my idealism.

Jane holds firmly to her principles. Despite loving Mr. Rochester, she refuses to marry him while he’s still married to his deranged wife or go to France with him. She knows what’s right and wrong, and she won’t compromise her values. Like many introverts, I, too, stick to my values (for better or for worse).

I also relate to Jane’s sensitivity. Jane feels things acutely, whether it’s injustices against her (like her relations’ abuse of her) or emotions that other people purposefully try to evoke in her (like when Mr. Rochester tries to make her jealous through the arrival of Blanche). She can’t help but be affected. While she might try not to be ruled by her heart, she’s easily softened and affected by the world and people around her.

INFJs and INFPs are extremely sensitive human beings. It’s normal for practically everything to affect us.

Jane endures a lot of heartache and suffering, what with falling in love with a man who hid the fact that he was already married (and only revealed it on their wedding day!) and suffering abuse from her relations as an orphaned child. Although our situations are nothing alike, Jane’s complicated inner turmoil and her resolute nature resonates strongly with my own personality.

To me, Darcy from Jane Austen’s Pride and Prejudice is clearly an INTJ, the “nonconformist” of the Myers-Briggs personality types. I’m an INFJ, the Feeling counterpart of his personality, and when I first read Pride and Prejudice (and then later watched the BBC mini series and the film), I found myself relating strongly to his character — flaws and all.

I find Darcy’s attitude towards people incredibly refreshing. He doesn’t hide the fact that he hates socializing, inane conversation, and gossip, or that he gets frustrated with superficial people. Honestly, I think that’s admirable. Sure, he comes across as rude at times (and sometimes he is!), but his unsociable behavior is actually kind of nice in a book populated by outgoing characters. He isn’t afraid to be himself — a private, analytical introvert.

These words from Darcy himself summarize his disposition quite profoundly, I think:

“I have faults enough, but they are not, I hope, of understanding. My temper I dare not vouch for. It is, I believe, too little yielding — certainly too little for the convenience of the world. I cannot forget the follies and vices of others so soon as I ought, nor their offenses against myself. My feelings are not puffed about with every attempt to move them. My temper would perhaps be called resentful. My good opinion once lost, is lost forever.”

Darcy most certainly has his faults, just like the rest of us. But I also see in him a self-confidence and an unashamed introversion that at times I wish I could express so blatantly in my own life. His coldness and disregard for people who he thinks aren’t worth his time aren’t unlike the classic INFJ door slam. I can’t say I’d like to be Darcy, but I definitely see myself reflected in him.

Although not technically a movie or a book, Jonathan Byers from Netflix’s Stranger Things deserves to be on this list. I think Jonathan is an INFP. While he’s not a main character in the series, he’s a character whose introverted nature I noticed immediately. I felt his shyness. I felt his thoughtfulness. I applauded when he said:

“You shouldn’t like things because people tell you you’re supposed to.”

I recognized his fear of intimacy and his layered mistrust of other people, and I strongly related when he said the most introverted thing one could possibly say:

“Don’t take it so personally, okay? I don’t like most people. He’s in the vast majority.”

His loneliness at being an outsider resonated against my own pain. As a result, I invested in his character, and he easily became my favorite in the show.

Jonathan loves photography. One of the reasons he enjoys it so much (and is never without his camera) is he’s passionate about observing other people. He captures moments, he watches interactions, he thinks about them, and he does all of this from the outskirts. In season 1, he’s an outcast. He’s bullied and mocked because he doesn’t have any friends but always has his camera. To an extrovert, that might seem weird, but to me, it’s relatable. As Jonathan says:

As an INFJ, I also love people-watching. Most of the time, I feel like I’m on the fringes of social events, too. Like many introverts, I feel misunderstood at times and lonely. I pull away from people because I’m afraid of being hurt or humiliated, and because it has happened in the past.

But then I see Jonathan begin to heal. I see him enter a romantic relationship with someone who initially disregarded him as boring and weird, but who comes to appreciate his quietness and thoughtfulness. I see his confidence grow as he soldiers new responsibilities, such as looking after his mother and younger brother, and becoming a source of support for the people around him, like taking on the role of an adult when his mother is grief-stricken. That inspires and encourages me.

Jonathan is a character who doesn’t need to say a lot to be relatable.

Katniss is probably an ISTJ, and ironically, she was the first fictional character that I strongly related to. Here we have a moody, quiet, stubborn female character whose quiet temperament isn’t being romanticized; she’s not adored by everyone, she’s not popular, and instead of being sweetly silent, her quietness is cold and abrasive. She hates social interaction. She dislikes small talk. She hates being in the spotlight. She’s aggressive, critical, and impatient. As she herself admits:

“I don’t go around loving everybody I meet, maybe my smiles are hard to come by…”

I relate to her a lot.

Not that I’m proud of my flaws, but then again, Katniss isn’t proud of hers, either. Nobody idealizes her. They don’t put her on a pedestal and worship at her feet. The adults lecture Katniss about her attitude (her mentor constantly tells her to smile, her teammates joke about her stony attitude, and Effie Trinket, the District 12 escort, says, “Eyes bright, chins up, smiles on. I’m talking to you, Katniss,” and she’s a flawed human being who has things she needs to work on.

But I love seeing that. Her brokenness — her humanness — is revealed, and it resonates with my own failings. It makes me feel less alone, and it encourages me to work on my faults.

How wonderful it is to relate to a character. What characters would you add to this list? Let me know in the comments below.

Amy blogs at A Magical World Of Words where she reviews books and movies, and posts about writing and mental health. She’s a feminist introvert with a passion for encouraging other introverts to embrace their introversion. She’s also an unashamed coffee addict and binger of TV shows.