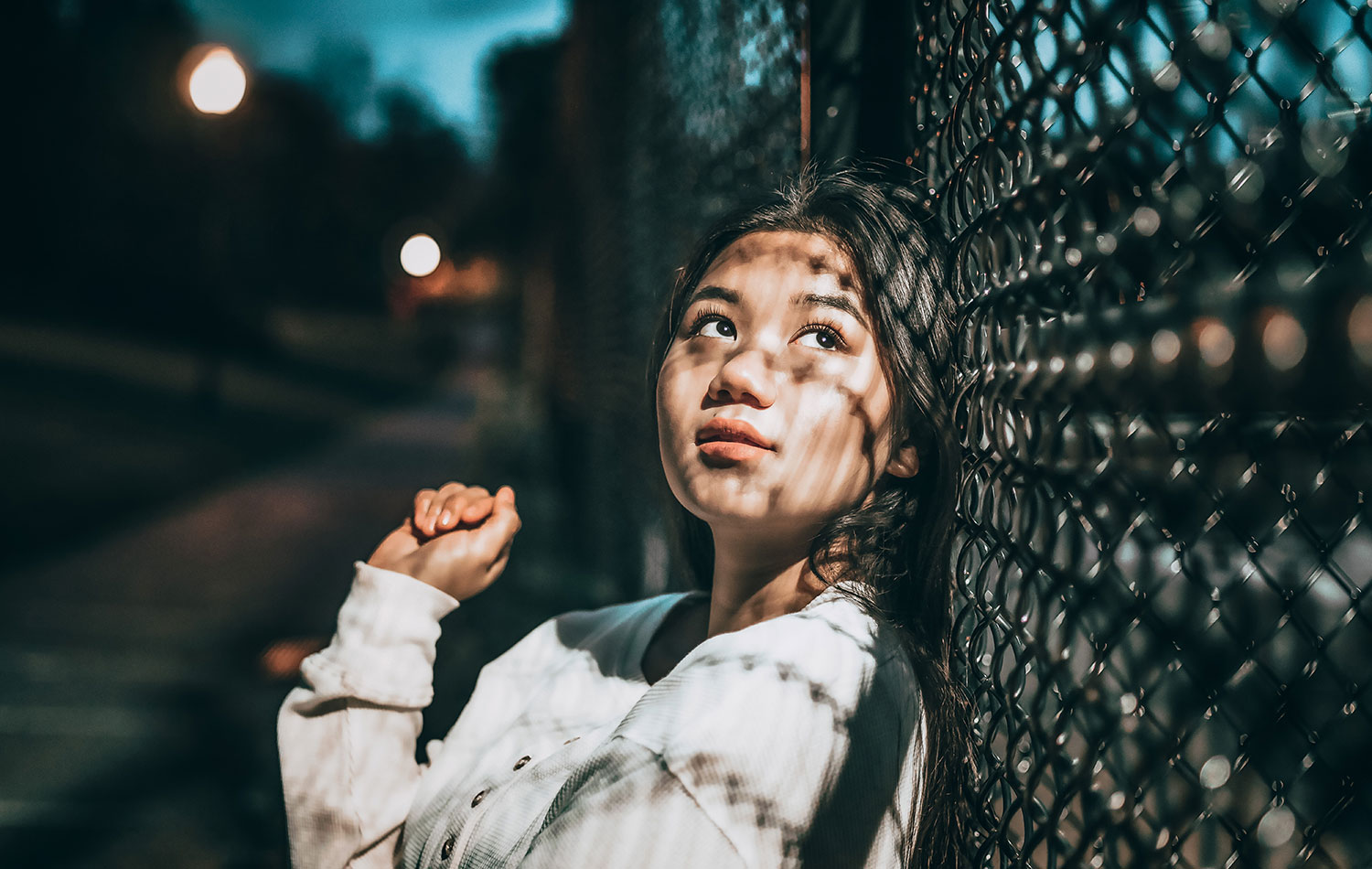 Sometimes being quiet is a fixed trait, while other times, it fluctuates with the perceived emotional safety and energy of the room.

During my freshman year Spanish class in high school, we were studying circus vocabulary. Lighting up the slide on the overhead projector were images of trapeze artists, kids holding cotton candy the size of their torsos, and an elephant hoisting a man in blue-and-white-striped overalls into the air with his trunk.

I was busy taking notes, and as I penciled the word for “trapeze” into my notebook, I heard Señora Hernandez ask the class: “Estudiantes, who in this classroom is a mime?”

The next thing I knew, she was pointing toward me.

I then watched as 30 pairs of eyes swiftly changed location from the overhead projector to me — and I wanted to the ground to swallow me whole. It was 75 degrees outside, but in that moment, I sank smaller into my baggy sweatshirt, pulling the strings on either side to tighten its hold on me.

My History With Being Quiet

For much of my life, I’d been an accustomed recipient to comments like these. Not only was I highly introverted — often preferring activities like reading and playing on my own — but also quite shy.

School report cards repeatedly came back encouraging higher levels of class participation. In kindergarten, a counselor called me “Molly” the whole day because I was too shy to tell him this wasn’t my name. In preschool, I once nearly wet my pants, unable to muster the courage required for asking to use the bathroom. My lack of speaking even led my parents to schedule me an appointment with a speech pathologist at the age of three.

A year before the incident in Señora Hernandez’s classroom, my cabin-mates at summer camp and I were playing “the cup game” while seated around a wooden picnic table. As pine trees, sequoias, and redwoods loomed in our midst, animated energy pulsed through the group — all of their gregarious temperaments adding logs to the fire of it. Mine was the only one that didn’t.

Suddenly turning to me, my cabin-mate Allie remarked, “You don’t say much, do you?”

Comments like these stung. They weren’t fun to hear, and I never knew how to respond to them. Being the “quiet” girl was not who I wanted to be. Still, I had no idea how to be anything different or anyone more. Thoughts just couldn’t seem to package themselves into intelligible speech before making the journey from my brain to my mouth.

Trying to Uncover My Quiet Origins

Following Señora Hernandez’s classroom shaming, I set out to understand what had “made” me this way. Ever the seeker, I wanted answers. One day, I asked my parents, “Could it be because that kid in preschool bit me? Which made it hard for me to trust anyone after that?”

“No, you were quiet before he bit you,” they said. “He bit you because you were quiet. He took your quietness as a rejection.” They were factual with a slight attempt at facetiousness to add levity.

Author Dustin Lance Black, who is gay, wrote that his early crushes on boys had “chased him inward.” I wondered if the same applied to me — if shame surrounding my sexuality had unconsciously sealed me up around other girls.

Boys were hard for me to talk to also, though, so my latent queerness likely only magnified and complicated a naturally inhibited disposition.

I wondered if maybe my quietness just came from feeling different than girls my age. In groups of them, I often felt like I was looking in from the outside, unequipped to contribute and incapable of matching their energy. My interests veered more toward Hot Wheels and Star Wars action figures than dolls and dress-up. Also, hair that came just past my chin, along with bangs, contributed to a baby Hanson brother appearance for much of my childhood.

In later years, I’d also uncover a biology-based hypothesis. I read about a study wherein researchers who analyzed the gut microbes of 77 toddlers ages 18 to 27 months found that kids with greater diversity in their microbiomes displayed more curiosity, positivity, sociality, and extroversion. In part, it stated: “Researchers hypothesize that gut microbes, by modulating stress hormones like cortisol, could be having an effect on how children interact with people or react in new situations. In other words, an outgoing, social, and confident child may have a more diverse microbiome — and therefore fewer stress hormones circulating through her body — than a shy, reserved kid who is hesitant in new situations.” (This was interesting because I also showed other symptoms of an unhealthy gut, and years later would be diagnosed with Celiac disease.)

Of course, this was only one study, but it helped me justify my quiet nature nonetheless.

Do ever you struggle to know what to say?

Learning More About Introverts — And What It Means to Be One

As I grew older, I learned more about introverts, who Susan Cain, author of Quiet, describes as individuals who “listen more than they talk, think before they speak, and often feel as if they express themselves better in writing than in conversation. Many hate small talk, but enjoy deep discussions.”

In my young adult life, I also began meeting other introverts. During my job as a case manager at a low-income housing site, rather than meet inside my office, my senior client, “Eddie,” and I did Tuesday “tea dates” at his house. We met there because my office — where clients came and went, copy machines whirred, and phones rang — often felt too clamorous.

Eddie preferred quieter places. Within the secluded privacy of his own home, he could inhabit his true self more easily. He could talk about things that he ordinarily wouldn’t when in the presence of many others — such as his thoughts on the latest book he’d read, his love of poetry, or something pretty he’d seen on a bike ride.

I related strongly to this.

With time, I also began to see where some of the shame over, and judgment of, introverted qualities stemmed from. I became aware of the cultural factors that contributed to the pervasive perception of quietness as a character defect.

Books like Quiet have shone some much-needed positive light on introversion, but there remains an undeniable cultural bias toward valuing extroverted traits. Cain writes about how introversion “along with its cousins, sensitivity, seriousness, and shyness, is now a second-class personality trait, somewhere between a disappointment and a pathology.”

She writes that although extroversion is an appealing trait, we’ve “turned it into an oppressive standard to which most of us feel we must conform.”

None of Us Belong Inside a Box

After years spent trying to uncover the “reasons” underlying the origins of my quiet nature, I did eventually arrive at an answer — the “why” didn’t (and doesn’t) matter.

I eventually grew to accept that I might always be quieter in large groups — most often when they’re made up of unfamiliar (or temperamentally incompatible) people. I’m much more comfortable in who I am now, and feel far less shame for not being able to conjure up extroverted energy or effortless words at will.

What I’ve also found is that “quiet” isn’t even a 24/7 state of being for me anyway. (And even if it is for some people, who are others to judge?)

I think back to the speech pathologist my parents took me to when I was three. During our session, she’d pulled out a yellow trunk full of plastic toy characters for me to play with — after which she “couldn’t get me to stop talking.”

I also think back to summer camp, when my cabin-mate called attention to my quietness towards the beginning of the week. I recall how, in the days after this, my spirit gradually became more animated.

Over the next two weeks, which passed by in a whir of activity, my cabin-mates and I cleaned horses together at the stables — first shampooing their fur, then rubbing a cleanser over their manes, then hosing them down. We learned how to shoot bows and arrows, zip down rugged terrain on mountain boards, and stitch together colorful lanyards.

Curled up in our sleeping bags at night, we’d talk politics in whispered, earnest voices while crickets chorused in the background. (A diary entry of mine from that time reads, “Allie thinks Bush is a good president but was able to respectfully listen to our views, which I thought was really cool.”)

As this all took place, I felt our bond strengthening and my apprehension melting away. The ice had broken. I laughed and shared willingly, no longer feeling restrained around the people who had felt like near strangers just a week prior.

When I was older, remembering this helped clarify something for me — that under the right circumstances, and when around people I trusted, animated energy emerges naturally. Because, while being quiet is sometimes a fixed trait, other times, it fluctuates with the perceived emotional safety of a situation, intuited commonalities, surrounding stimuli, and the overall energy of the room.

Present-Day: Reveling in the Quiet Moments

We can help introverted children by not calling negative attention to their quiet temperament, especially in front of their peers. Many times, it’s not a sign that something is wrong. But if, and when, it is, instead of shaming or seeking to “correct” quietness, maybe we can think about this: What is it about this environment that’s not aligning for this child right now? How is it failing to meet their needs?

I now revel in quiet moments, and embrace that some of my favorite activities take place in them. I’ve learned to seek out the company of other introverts and reflective people with whom I feel seen. I’ve come to see that, as introverts, we can minimize our time spent in big groups and maximize our time in smaller ones. (Or, spend more time in one-on-one interactions that we find meaningful.) In essence, we can spend time with people who understand and value us. In fact, doing this feeds our “quiet” souls.

I know now that my quietness is not always a wall. Sometimes, it’s a clearing of space to take in more of what matters most to me. I hope you find it meaningful to you, as well.

A lifelong introvert, Eleni is also a Spanish interpreter and freelance writer living in Oakland, CA. In her spare time, she enjoys wandering through nature, reading psychology and mindfulness content, speaking Spanish, and petting cats. You can follow her on IG, @eleni_steph_writer, and read stories from her time as a Lyft driver at LyftTales.com.