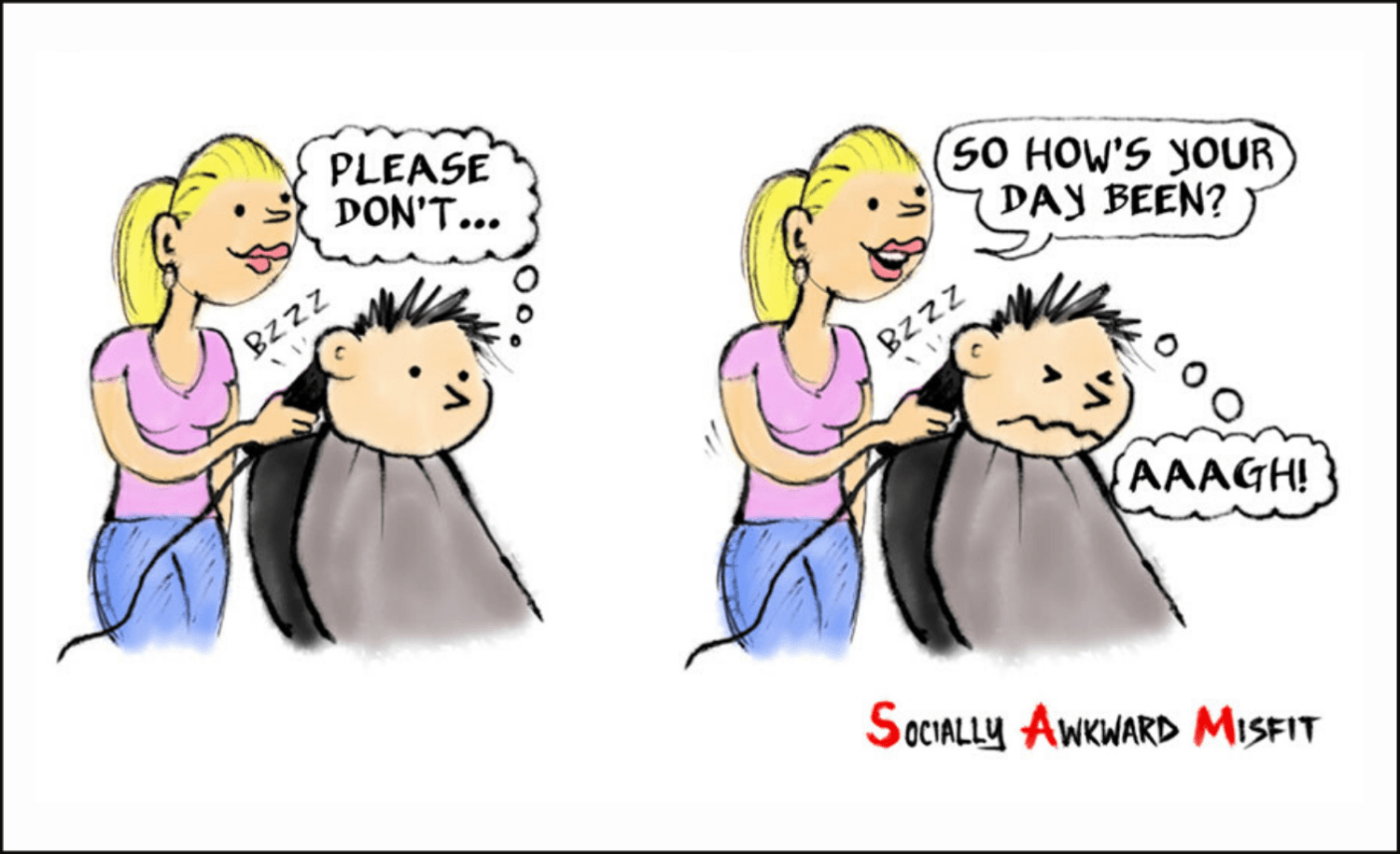 SAM, the Socially Awkward Misfit, gets himself into a lot of uncomfortable situations — situations all introverts have experienced at some point in their lives.

SAM also has social anxiety, making it even harder for him to feel comfortable around people, especially those he doesn’t know well. If you’ve ever been told to “relax!” or “just be yourself” — when your self is an anxious introvert who’d rather be at home — that’s SAM.

Created by artist Ross Hendrick, Socially Awkward Misfit is inspired by common frustrations that introverts face, such as the constant you’re so quiet comments. “Some people are just downright rude to quiet people, and some of the comics are actual recreations of things that people have said to me over the years,” Ross told me via email.

The comics are based on the artist’s life (although sometimes Ross exaggerates for the sake of humor). “He might come across as a little more of a hermit than I actually am,” Ross told me about SAM. “Although only a little bit!” And often SAM has witty comebacks that Ross wished he’d thought of in real life.

Ross lives in Exeter, UK, and has worked for well-known British comics such as The Beano and Viz. SAM started a few years ago as just a few sketches in Ross’ notebook, but quickly grew to become more. “I didn’t realize that there were a lot of people around the world who related to the same things I went through,” Ross said in his Kickstarter campaign. Now many people tell him his comics helped them understand their introverted family and friends better, as well as themselves.

Although introversion and social anxiety are not the same thing, it’s common for introverts to experience it. Ross says he happens to be an introvert who also has social anxiety, so the comics reflect both these things.

“Fortunately, my anxiety has improved over the years,” Ross told me. “At one point, I found it hard leaving the house. An introvert doesn’t necessarily have feelings of anxiousness doing every day things, they are just not too keen on socializing much. The way the two can combine to make social situations worse is when you don’t want to be there having to make small talk as an introvert, but then the more intense negative thoughts and feelings of anxiety can take over.”

One of the biggest things that has helped him over the years is embracing his introversion. “I’m not going to change myself to please other people. The internet has been great in discovering how many other introverts there are out there. This can be a comforting thing to remember in times when I’m not feeling good in social situations.”

Like all introverts, SAM (and Ross) get easily drained by socializing, and need to be alone to recharge.

As an introverted artist, his favorite way to recharge is drawing alone. “To extroverts, I guess this would be a problem,” he said. “But being introverted, I have been able to devote a lot of time to developing my artwork without feeling the need to be socializing instead.”

Want to see more of SAM? He gets himself into some extra excruciatingly awkward situations in the new comic book story, Anxiety. The book also features new exclusive comics and a compilation of the best comics from the last two years.

When you join Ross’ kickstarter campaign, you can get signed copies of the book, original hand-drawn comic strips, personalized artwork, and even SAM depicted in pop art style paintings. Join his Kickstarter campaign here.