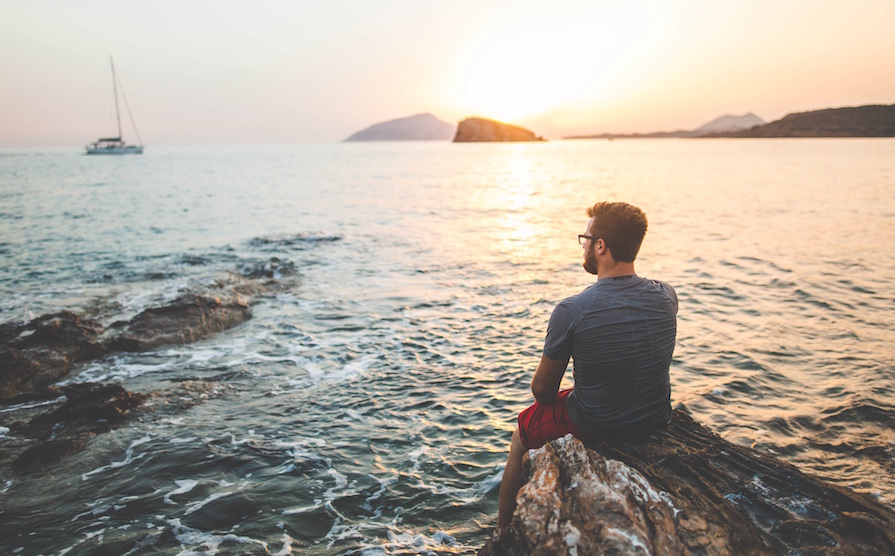 It’s no secret that introverts like being alone. We read, watch Netflix, surf the Internet, or whatever. No matter what your preferred solo activity is, it turns out downtime isn’t a waste of time—it’s actually really good for your mental health, your productivity, and even your relationships. Here are 12 ways spending time alone makes your life better:

1. You solve problems more effectively. Has this ever happened to you? You have a big decision to make, say, whether you should quit the job that’s making you crazy and take a new gig that promises more sanity but pays less. You just can’t seem to make up your mind, so you talk to friend after friend, changing your verdict each time someone makes a convincing argument. Then you go home, spend the night alone, and when you wake up the next morning, you know exactly what to do. Your brain seems to have magically solved your dilemma for you.

Problem solving doesn’t always work this way, but it can. That’s because the unconscious mind needs solitude to process and unravel problems, according to psychologist Ester Buchholz. Getting away from other people can clear your mind and help you focus better. For this reason, when Ester’s patients are faced with a problem, she gives them advice that at first seems counterintuitive: spend time alone and don’t focus on the issue head-on. Buchholz explains: “Others inspire us, information feeds us, practice improves our performance, but we need quiet time to figure things out, to emerge with new discoveries, to unearth original answers.”

2. You discover yourself. You can’t figure out who you really are if you’re just another nameless face in the crowd. It’s easy to let your cliques’ likes, dislikes, and values edge out your own. Traveling alone, going to a restaurant by yourself, or doing anything that gives you the opportunity to spend time with yourself will help you get in touch with your true identity—apart from what your friends or family think you should be. You’ll find yourself finally being able to tune into your own thoughts rather than being bombarded by other people’s words. Your inner voice may surprise you, and you may make different decisions on your own. You may discover that rap music does not actually appeal to you or that you’re more capable than the people around you make you feel. As French philosopher Michel de Montaigne once wisely noted, “The greatest thing in the world is to know how to belong to oneself.”

3. You improve your relationships. Again, this may seem counterintuitive, because being alone means you can’t spend time with other people. But if you’re an introvert who is socially burned out, how much will you be contributing to the social interaction in a meaningful way? You may even find yourself feeling cranky and irritable, snapping at the littlest things, and zoning out when someone is talking. That’s not going to score you any brownie points with your significant other or make a good impression on your new coworkers. This is when absence really does make the heart grow fonder. After you’ve spent time away from the people in your life (and recharged your introvert battery), you may find that you appreciate them more when you see them again. Bonus: if you’re spending time by yourself and gaining a better understanding of who you are and what you want out of life, you’re more likely to make better choices in the first place about who you call “friend.”

4. Your brain can finally stop multitasking. Research suggests that simply being around another person sucks up a certain amount of the brain’s attention, making some tasks harder. In other words, people literally steal your brainpower. Researcher Bethany Burum explains: “We’re multitasking when we’re with other people in a way that we’re not when we just have an experience by ourselves.” That’s because other people automatically occupy part of your attention. That’s why it’s harder to do a job with someone looking over your shoulder—you have less brainpower to spend on it. Even extroverts, who may not get as self-conscious as introverts, still have to divide their attention to be around people. So you don’t really function better alone. Rather, you function normally when alone, and worse when around others. At least if you’re doing anything besides chatting.

5. Going somewhere alone can be just as much fun. Your favorite band is in town, but you can’t get anyone to go to the concert with you. Does this mean you should skip it? No way. A study conducted by professors Rebecca Ratner of the University of Maryland and Rebecca Hamilton of Georgetown University found that people have an equally good time partaking in fun activities on their own as they would if they were doing them with other people. “[The research] provides empirical support for a key premise of our investigation: consumers who forego hedonic activities alone are missing out on opportunities for rewarding experiences,” the researchers wrote. The not-so-fun part comes in when you worry about how others will perceive your aloneness. Do they think you have no one to hang out with? This means if you can get over what others think of you, going to the concert alone could be a blast.

6. Likewise, you form better memories alone. An ongoing Harvard study suggests that people form more lasting and accurate memories if they believe they’re experiencing something alone. So attending the concert solo could turn out to be one of your most vivid memories.

7. You empathize better. If you have regular alone time, you develop more empathy, especially for people outside your social group, research suggests. This is probably because you spend more time on inner reflection. Solitude actually makes you more connected to others.

8. You think more deeply. Because people suck up your brainpower, it’s nearly impossible to have nuanced, rich thoughts when you’re engaging with others. Alone, you may find that you have deeper insights. As the famous deep-thinking poet Rumi noted, “A little while alone in your room will prove more valuable than anything else that could ever be given you.”

9. You focus better. According to a study by professors Richard Arum of New York University and Josipa Roksa of the University of Virginia, students who study by themselves are more likely to succeed and to retain knowledge than those who study in groups. That’s because students who spend time in solitary reflection likely have improved concentration.

10. You increase your productivity. When the teacher announced that the next project would be a group effort, did you shudder? I remember on more than one occasion asking the teacher if I could work alone. That’s because “social loafing” is real. According to psychologist Gary Gilles, social loafing is the assumption that less effort has to be exerted because more than one person is involved. Working in groups is typically seen as a way to improve the accomplishment of a task by pooling the skills of the individuals in the group; however, in some groups, there’s a tendency to contribute less to the group’s goal than if each member were doing the same task themselves. This can have negative consequences: resentment builds between group members who are doing more work and group members who are contributing less. This can lead to lowered productivity, more emotional tension, and less satisfaction with the task. Tackling a job alone may be the best way to get it done quickly and efficiently.

11. You get to have it your way. Being in the company of someone else means you will always have to compromise on some level. They want lobster for dinner but you want pizza? You can’t always get what you want. You want to shop but they want to hike? Only one of you gets to spend the day your way. But when you’re alone, you can have it your way. You can eat pizza in bed while shopping online if that’s what floats your boat.

12. You may think more creatively. People come up with their best material on their own. “Decades of research have consistently shown that brainstorming groups think of far fewer ideas than the same number of people who work alone and later pool their ideas,” according to psychologist Keith Sawyer of Washington University in St. Louis.

To learn more about the science behind introversion, check out my book, The Secret Lives of Introverts: Inside Our Hidden World.

Read this: I Wasn’t Living My Life Until I Learned to Stay Home