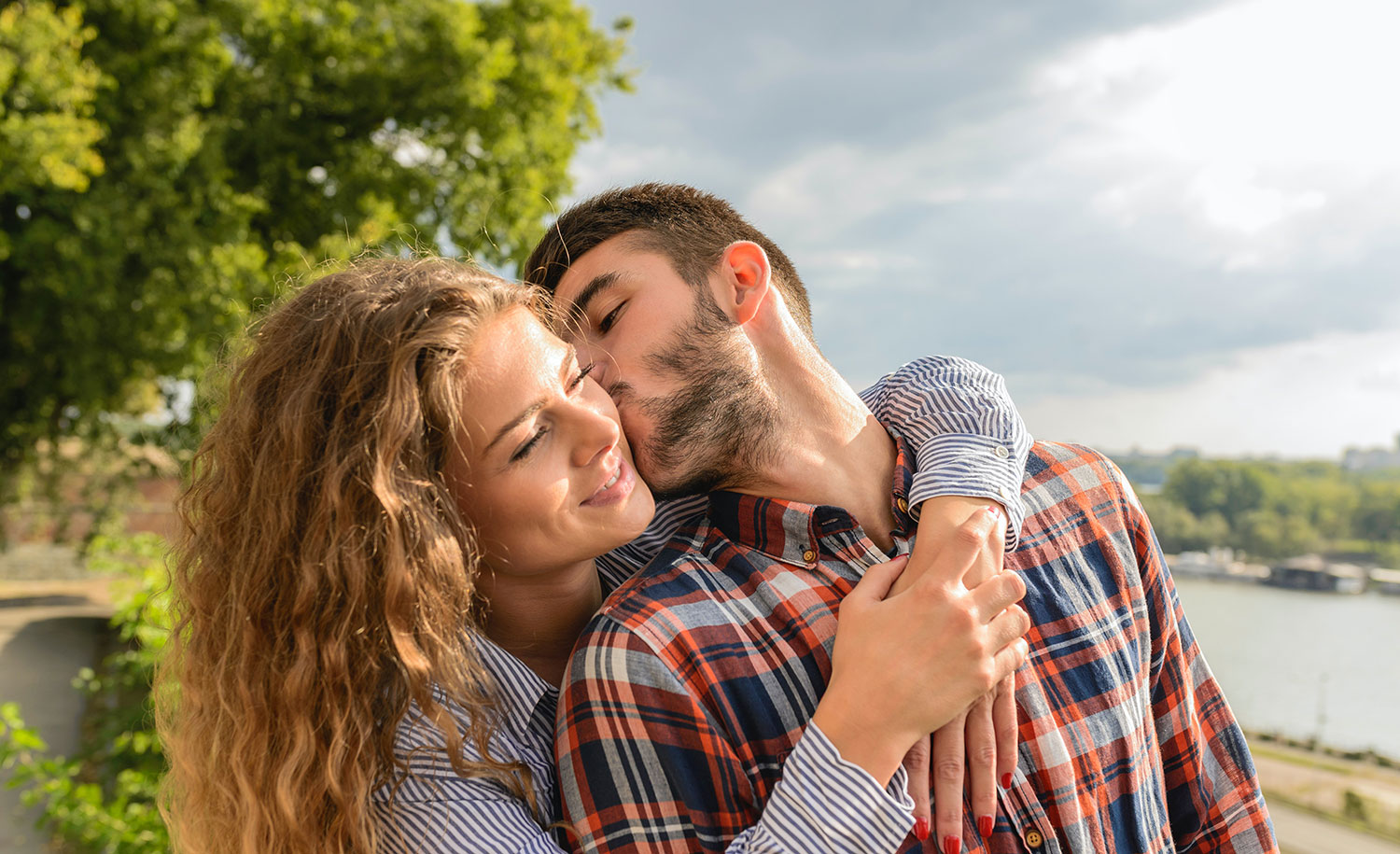 In dating an introvert, I’ve realized the most important thing is how happy we are as a couple, rather than what personality types we are.

My boyfriend, Paul, and I are having our first fight. He just doesn’t know it yet.

We’re driving home from a symphony performance dressed in our business-casual best. I’m quiet and sullen, head tilted toward the window, silently brooding about the evening. He had been standoffish and terse all night. At intermission, I had led us to the bar for a reprieve, weaving us through the packed crowd like a double note. An extrovert, I stood and drank in the atmosphere, tipsy with the energy of it. He lasted less than five minutes before releasing my hand and returning to our seats. Later, on our way back to the car, I ask him if he enjoyed the production.

“Yes,” Paul says, distracted by the droves of people.

Driving home, he’s relaxed and chatty while I answer in one-word bursts. In my periphery, I see him darting glances in my direction. He finally pulls over to the side of the road and asks me what’s wrong. Aghast, I respond indignantly with a rundown of his behavior that night. He looks at me calmly for a moment, then simply says, “I’m sorry. I found all the stimuli overwhelming.”

“Because I’m an introvert, and there were a lot of people,” he says.

Growing Up With Introvert and Extrovert Parents

The classic clash of the introvert vs. extrovert had commenced. That night was the first of many firsts. There was the first time we hung out with my friends and he was quiet. The first time he came to one of my parties and I barely saw him all night. The first time he met my parents and I thought he was just nervous. It took me a while to process the pattern I was seeing: that my lively, silly, and affectionate boyfriend was none of those things in public. He’d been replaced by someone serious and shy, his warmth still evident, but tinged with a coolness. A creeping fear swept slowly through my stomach; this seemingly insignificant divide between us might just amount to more than I had calculated, I thought.

Meanwhile, he said he understood my extroversion, that he’d been around it all his life. The problem was, I’d also been around someone like him: my dad, the most gregarious introvert I’d ever met. When my dad is in his element — cooking for family and friends — he lights up the room. He will give you every ounce of energy he has, and then promptly retire at 9 p.m.

My mother, on the other hand, the reticent extrovert, is quieter, less inclined to lead a conversation. But she will sit at the table until the wee hours of the morning, smiling and soaking up the atmosphere, her tea cup never seeming to overflow.

Over the years, I’d watched my parents struggle with their contrasting natures. As a child, I sympathized with my mom. As an adult, I’ve dated introverts like my dad. Determined to disprove the disturbing notion that I had unwittingly ended up with my father — and to avoid my mother’s at-times unenviable position — I started taking notes.

Note #1: Extroverts Can Be Draining for Introverts

One lazy Saturday, both hungover, Paul and I went for brunch. We ran into a group of friends of mine, and I happily suggested we eat together. Two of my besties in particular are quite rambunctious, and brunch turned into a conversational feast; I could feel myself feeding off my friends. Afterwards, it was decided the group would head back to my place for some cocktails on the deck. Paul pulled me aside and said he was leaving.

“Why!?” I asked him. “How fun is this, having an impromptu gathering?!”

“I’m not mentally prepared to socialize,” he said, looking pained. He kissed me goodbye and I stood, confused, on the sidewalk.

Later, he told me the brunch had been draining. He likes my friends, he was quick to clarify, but felt he couldn’t compete with them for conversation, particularly when hungover. He cautiously described my two energetic friends as “extra”: extroverted, extra-talkative, extra-animated. I nodded in agreement. For me, they were revitalizing. For him, they were overstimulating.

Note #2: Give Your Introverted Partner the Space They Need

For my birthday last year, a group of 12 of us went camping for three days. Each day, Paul would quietly untangle himself from the group and go for a short walk. He was so subtle, he’d be gone before I noticed. When I later enquired about his solo adventures, he admitted that he sometimes needs to “check out.” Whether that’s a walk or a quick game on his phone, his quiet time helps him reset in the midst of a large group.

I used to glare at him over this, interpreting his actions as rude and disinterested, when in fact he simply knows his boundaries, practices self-care in public, and consistently pushes his energy longevity for my benefit. I think of it now as a pit stop during a road trip: Necessary.

Note #3: Understand That They Thrive in Small Groups

For our first Valentine’s Day together, Paul and I decided to go out for dinner. On the way, we stopped by my friend’s party. We stayed for an hour, during which Paul was quiet amidst the strangers.

When we got to the restaurant, it was full, so we popped over to the pub around the corner to wait. It was also full. The hostess told us there was a booth in the corner with two “friendly guys” who were happy to have company. We looked each other in the eye and wordlessly agreed: Why not?

Turns out, they were my old high school teachers. The four of us got along unbelievably well. When Paul got the text that our table was ready, he quietly suggested we stay. Again: Why not? We stumbled home at 2 a.m. and “cheers”ed to the occasion with some cereal. Best Valentine’s Day ever.

Note #4: They Are Full of Surprises

Over the course of a year, the pattern became clear. In larger settings surrounded by extroverts, Paul would fade. In smaller, more balanced groups, he would flourish; he would be relaxed and witty, he would participate in (and provoke) discussion, he would be a shrewd observer and a keen comedian. He didn’t want to go dancing in public, but he said yes to every other social event I suggested. His behavior was finally predictable and we understood each other — and our needs — more than ever.

Then came Blind Date. The premise of the Canadian play is the actress selects someone from the crowd to go on a date with, much to the audience’s amusement. Prior to the show, she schmoozes with the audience in the lobby, casting her charismatic web in the hopes of catching the ideal fly. She spotted my tall, bearded man instantly, and flirtatiously sidled up to him to ask what he did for a living. “I work in tech,” Paul said. Her eyes lit up. “Oooh, you are so handsome and natural,” she crooned in a French-Canadian accent. “Would you like to be on my ‘maybe’ list?” she asked, lips pursed.

He paused for a brief second, then said “Sure,” and smiled politely. I gawked at him. She smiled back, fluttered her eyelashes, and walked away. He sheepishly shrugged his shoulders and I shook my head in amusement. I wondered what he would actually do if he were called: Sit still and turn beet red? Quietly march forward to his doom? Quickly run out of the room?

Well, I got my answer. When she called his name, his eyes went wide. I could feel his shock as my own reverberated through my body. It’s a bizarre feeling when something you think might happen actually does. The hairs on the back of your neck stand up. He took a breath, smiled, and calmly walked toward the stage.

The show began. There was the flirtation period where she got to know him, the first dinner, first kiss (which I endorsed from my seat), first child — yes, she actually “gave birth” on stage. It was hilarious. He named their daughter after me. When she haughtily asked who he came to the theater with, he publicly asked me to be his girlfriend.

He was charming, funny, awkward-in-a-natural-way, brave, and entertaining. He didn’t just give one-word responses, but actively engaged with the performer. He cracked jokes and melted hearts. (He told me later, though, that he’d been nervous and he tried his best to make it an entertaining show for the audience.)

Afterwards, he got a standing ovation. The row of women in front of me turned around and asked if he had a single brother. I fell in love with him that day.

Discovering My Quieter Side

And then COVID-19 hit, the colossal surprise of 2020. We were all told to isolate, and I panicked. How would I not become socially bereaved? I quarantined with Paul, and in those early weeks and months, he helped me through the tears and helped me swallow my fears.

Despite his own work-related Zoom fatigue, he joined me on video chats to friends and family. He read scripts of plays with me. He organized a lively dance party for two. He didn’t need to take notes: He just knew.

And over all those months, I surprised myself by discovering my own quieter side. Turns out that the constant socializing I’d been used to was actually exhausting. Maybe I was more like my dad, and Paul, than I initially thought.

I also surprised myself by falling deeper in love with him than I thought possible. The cozy environment we’d co-created brought us infinitely closer.

And, speaking of surprises, we recently celebrated our two-year anniversary, and Paul shocked me with the biggest one yet: He asked me to marry him.

With Introvert/Extrovert Couples, How You Two Get Along Is What Matters Most

In dating Paul, I’ve realized the most important thing is how happy a couple is when they’re together. I had no idea Paul was an introvert until we started socializing with other people. When he’s just with me, he lights up the room. He can be who I need in private, and I can be who he needs in public.

He listens. He reflects. He empathizes. He understands when I frequently buzz off with my friends. He’s the constant honey in my life, and I’m the bear who keeps coming back for more.

Are you an introvert who shuts down around the people you’re attracted to?

As an introvert, you actually have the amazing ability to be irresistible, without forcing yourself to talk more. It all starts with recognizing the most common myths about dating and learning a framework for fun, flirty conversations — no extroversion needed. To learn how to connect with your true sensuality, relax, and open up on dates, we recommend Michaela Chung’s online courses for introverted men and introverted women.

Keara Barnes is a writer, actor, and filmmaker from Vancouver, B.C. A former theatre critic for ThreeWeeks Edinburgh magazine and the Greater Vancouver Professional Theatre Alliance, she is the creator/performer behind two solo shows that have toured throughout Western Canada, one of which she recently adapted into a short film and will be premiering later this year. Her writing has been published in SAD Mag, Understory Magazine, and Intermission Magazine. You can find out more about her at KearaBarnes.com | @kearalbarnes