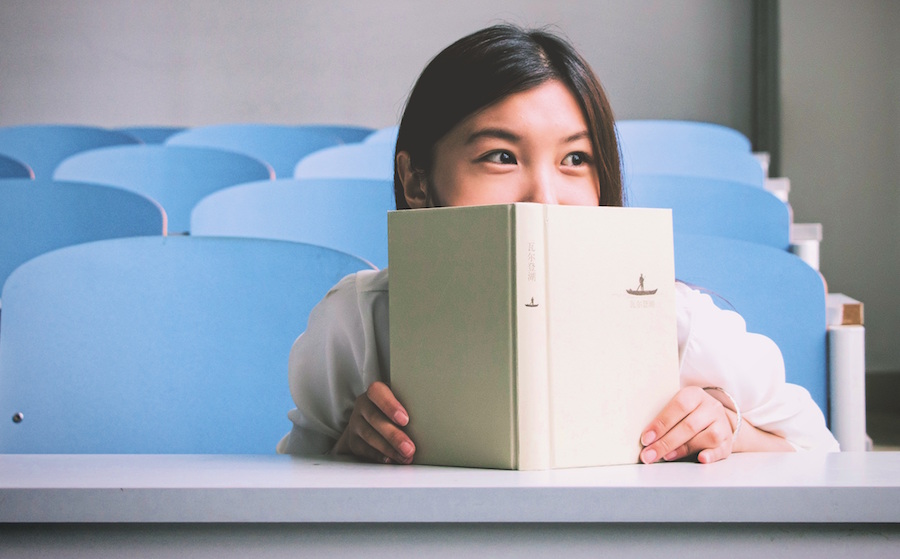 It was my first semester of college when I truly began to understand what being introverted meant. Until then, I had battled low self-esteem and negative thoughts. It never occurred to me that embracing my introversion was the cure.

Of all things, it took one class to change everything. The last day of my first week of college I had a…wait for it…speech class. My stomach turned, my palms started to sweat, and I swear I lost all my hair as I walked up to the classroom. I was, as usual, thirty minutes early. Being early usually comforted me, but, for speech class, it just made the anxiety worse.

Class finally started. I had gone mad by this point because for the last couple of hours I had been busy imagining how this class would go. The professor looked nice. Maybe we would do more writing of speeches than presenting them? But that was only wishful thinking.

For the next couple of hours (it was a three-hour class), I not only learned that my professor, was, well, unusual, but also that there would be no tests. But there would be six presentations, and, of all things, a graded flash mob. Take your time to process that last one. I am still processing it, three years later. Our first assignment was to get into groups (GROUPS?!?) and perform a three-minute dance (DANCE?!?) on campus the following week. This was unknown to the rest of the student body, which is why the professor called it a flash mob. Can you say awkward? I mean, I’m an awkward person in general, but at the time, I didn’t understand why this horrified me so much. I just thought I had issues.

Over the next week, I practiced and practiced until the time finally came. I did the dance with my group and vowed to never dance in public again.

The rest of the assignments were similar to that first assignment. I practiced for speeches over and over, imagining all the worst possible outcomes and vowing to never speak in public again. Speeches came and went, and I got my first job working in retail socializing with strangers for six hours a day. Toward the end of the semester, my professor started preparing us for our final: a seven-minute research speech. We hadn’t done a speech of that length yet, so I began to really doubt my abilities.

Then, during one of the lectures, my professor introduced us to TED Talks. I was captivated by the courage of the speakers and how easy it seemed for them to talk in front of a large crowd. In my usual style, I responded by beating myself up internally for being so weak and pathetic. Why was it so hard for me to be peppy and extroverted? Why couldn’t I be funny and make people laugh? Why did my body twitch uncontrollably as I stood in front of people? (Of course my classmates pointed that out.)

I was tired more and more those days and I wanted to be alone a lot. This change in myself confused me. I was, however, so in awe of those people on TED that I went home and watched more. I didn’t exactly know what I was looking for—I just knew that I needed some inspiration.

It was then that I discovered Susan Cain. I cried and laughed. What she said in her Ted Talk—about disliking group work, loving books, and needing time alone to recharge—grabbed me. She was an introvert on a stage in front of hundreds of people! She was an introvert and doing what I swore I couldn’t do—and she was doing it exceptionally well. I found the inspiration I was looking for and so much more.

Of course, I still have my own issues. I am the product of parents who divorced, bullying (for being quiet), and a single-parent household. But other things—like being socially weird and clamming up around new people—weren’t issues at all. It was just me being me.

I feel liberated, to be honest. I can’t quite put into words how it feels to not have constant negative thoughts day in and day out. After I watched Susan Cain’s speech, I became obsessed with introversion. I bought books like Quiet: The Power of Introverts in a World That Can’t Stop Talking. I found websites like Introvert, Dear that became life savers. I told my dad about it and he listened, excited for me. My posture became straighter, my smile bigger (when I show it), and my chin higher. I don’t walk looking at my feet as much as I used to. I sit in the back of my classes with pride now.

Who knew that speech class, of all things, would help me find my introverted self? I like myself now. I finally really do.

Read this: Just Because I Don’t Look Excited Doesn’t Mean I’m Not Into This

Brooke is an introvert and INFJ personality type who likes to run, loves to read, and never stops dreaming.