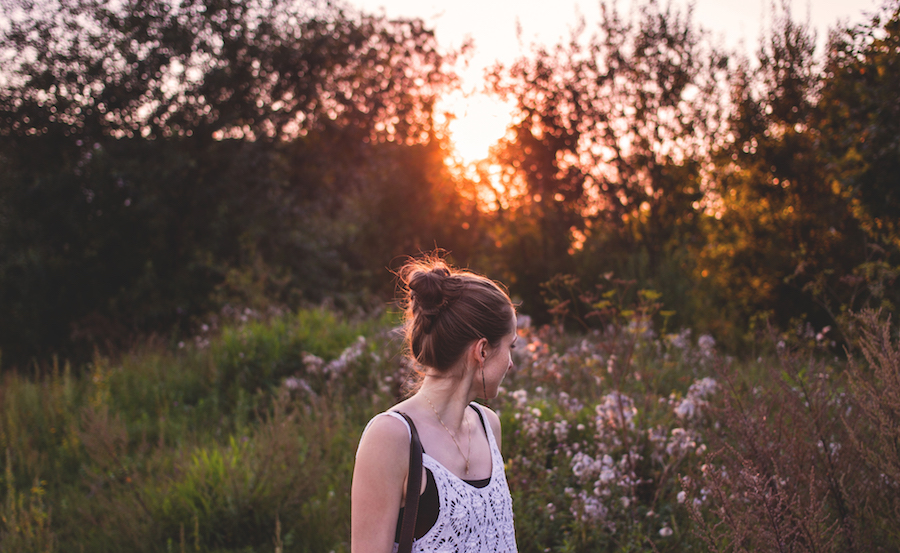 A few weeks ago, I met my partner’s best friends for the first time. I experienced something that is quite routine for an INFJ empath and a highly sensitive person, but nevertheless, it left me in a state of awe: I “visited” another human being. (If you’re not familiar, you can learn about the INFJ personality here.)

If you’ve seen the heavily-praised Netflix series Sense8, penned by the extraordinary Wachowski sisters, you have an idea of what this experience is like. Sense8 depicts the whirling, merging lives of eight young people who share a hive mind. The characters slip between their world and those of their sensate companions, leaving their bodies behind while taking an astral journey to another life. The series calls this “visiting.”

In one episode, two sensates, Sun and Riley, huddle together in a prison cell. Riley has projected herself into Sun’s reality, absorbing Sun’s anguish; the two gaze at each other, as if participating in a healing moment. It’s a mental union of genuine understanding. Watching this, I made a powerful connection: all of us empaths have the remarkable ability to feel what most people cannot feel without being told.

Seeing What No One Else Sees

In the hot tub at my house on a Saturday night, I lounged with my partner and her two close friends, drinking copious amounts of wine and exchanging copious amounts of laughter. Enclosed in the din of female voices and the roil of the jets, I felt a surge of electric energy—a happiness boiling to the surface. But then I felt a throb of pain in the air, floating upward with the steam, and I stopped.

It was one of my new friends. Her aura was sputtering, turning cold, blinking in fear and shock. She was having an anxiety attack, though she hadn’t fully externalized it yet. However, I registered the nearly imperceptible change in her mood, the shift in her features, and the agony in her eyes. I rushed toward her in a split second, unsure of why, and enfolded her in my arms.

My partner and her other friend ended their conversation abruptly to join us, speechless but calm. I, on the other hand, seemed to feel tears welling in my eyes as I latched onto my frenzied companion, placating her as the tears began to fall. Only then did everyone else feel the concern that I myself had felt minutes before. Together, we all held her there in the water.

Only later did my partner’s friend tell me how quickly I had noticed her strife. “You’re awakened,” she whispered to me. “You felt it right away, when no one else did. You felt the change. You’re a true empath.”

I had heard these words before, through my partner, who had helped me claim the term for myself several months prior. But never before had I been called awakened by someone else so spiritually enlightened, and it resonated in my heart as few words ever have before.

That night, I felt like a sensate—a superhero—able to burrow myself into the brains of those with whom I’m close, and even those I don’t know well at all. That night, I recognized the depth of what I feel, as well as the extent to which I am often the only one around me who feels it.

In the early ‘70s, a boy named David Vetter lived within a plastic bubble engineered to protect him from a world he could never touch. Vetter was born with severe immunodeficiency, enclosed within a miracle of science that prevented his contact with even the open air. At age 12, soon after he was released from his enclosed life, the boy died.

Although I have never been completely cut off from the world like Vetter, I can somewhat imagine how he felt, because I, too, have experienced severe isolation throughout my 22 years. Sometimes I feel I must draw great gasps of air in order to survive in a world that cannot see what I see, feel what I feel, and absorb what I absorb. I reside within somewhat of my own hermetic chamber—a chamber that’s probably well-known to other empaths. In it, we barricade ourselves against our own demons and those of others. If we don’t, a tidal wave threatens to sweep over us and drown us alive. So we try to watch the world from behind glass, terrified that anyone who draws near will breach our defenses, their emotions fusing with our own in one dramatic misstep.

The INFJ empath’s bubble is thin and permeable; we guard it with our lives, and yet we still hear and see and feel too much. We occasionally lower our force fields to take the hands of those we feel need us, bringing them inside our bubble—only to realize that multiple bodies in such an enclosed space makes us choke and wither. With someone else with us in the bubble, we become an emotional dumping ground, and we grow feebler and feebler as we begin to forget ourselves. An outsider’s body becomes our body—their pain, our pain. A transmittal of consciousness.

We become tragic heroes. Our goodness and desire to help others becomes our downfall. Our only hiding place becomes a nightmarish ruin. Rarely does anyone know what’s happening, because while we can hear voices from beyond our bubble, the outside world can’t hear our screaming within. Empaths—especially INFJ empaths, who may already live a life of alienation and misunderstanding—are an island unto ourselves. We are seemingly cursed to express our truths only to realize that, when we open our mouth, all that escapes is empty air.

Sometimes, when I’m bummed about being an empath whose heart is an open doorway to emotional traffic, I imagine I’m Jean Grey from the X-Men comics. The Jean Grey—an omega mutant and, coincidentally, an exceedingly empowered empath. Like us, Jean knows what it means to be engulfed by your emotions and those of others: I interpret her Dark Phoenix form as a metaphorical representation of empaths in our most terrifying and vulnerable moments. We sob, we shriek, we rage.

But, in the end, we channel our inner gods and goddesses, our unique selves. We fortify our personal bubbles while allowing ourselves breathing room to feel the world beyond in small, meaningful bursts. We will never cease to be what we are—but what we are is beautiful. We are channeling Jean Grey, harnessing our powers day by day and recognizing the tremendous force we are, but never forgetting that it’s natural to succumb to the weight of the world every now and then. Still, we will rage on like the fiery redhead we know and love, so very aware of the world. And in that way, we are truly blessed.

Did you enjoy this article? Subscribe to our newsletter just for INFJs to get more stories like this.

Lauren is a INFJ personality type and a wannabe druidess with a passion for horror media and an enduring obsession with psychological ruminations. When she’s not pouring her too-sensitive soul into existential ramblings and her ongoing “agenda of anxieties,” she’s busy being just a little too queer, a little too theoretical, a little too consumed by all things aesthetic, and a little too much of an empath. She welcomes you through her hole to another universe — where art and cats abound and feeling things too much just means you’re normal.