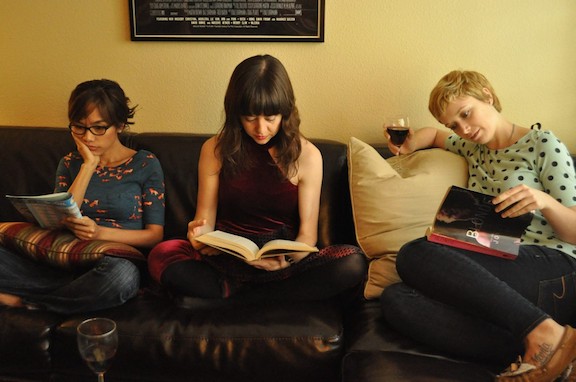 Rachel Tucker, creator of the Introverts web series found on I, D, talked with I, D about what’s coming up in season two, and how being an introverted filmmaker takes her out of her comfort zone.

Rachel: We were pretty fortunate that, unlike in a feature film, we will get to work with pretty much the same people we worked with last season. In general, we try to bring back familiar faces whenever we can in our projects. I like the idea of linking things together as a sort of brand a la Wes Anderson, or P.T. Anderson, or plenty of other people who aren’t named Anderson.

In addition to the original group of friends, we’ll get to meet Ri, a friend of Amy’s who drives Susan crazy. He’s basically a pathological liar who tells the most interesting stories about things that never happened. Susan’s constantly struggling to control her temper and remain polite around him, which pretty much always backfires.

Rachel: The girls are going to get out more. That’s actually a big luxury for us to film on location in LA on our budget. Thanks to some helpful local businesses, we’ll get to see Amy try her luck with online dating. Waltra will have to endure lunch with her high school friends. She has a big complex about that, because she chose to go to film school instead of a more traditional path. And the girls will get into a debate over the merits of Jane Austen that turns pretty intense.

I, D: As an introvert, do you have to do things that take you out of your comfort zone?

Rachel: It’s when I have to start arranging meetings and making phone calls every day because time is running out, and we still need two key locations and a cinematographer. There’s simply no easy way to call up a random bar and try to convince them to let us shoot in their establishment for very little money. I do take comfort in knowing that one of my most extroverted friends once confessed that she too hated making those types of calls. As we get closer to shooting, my fear of not being ready in time outweighs my fear of getting yelled at by a scary phone person just enough for me to actually do the deed.

I, D: When can we expect to see the first episode?

Rachel: We’re shooting a Christmas episode, so that’ll be out before Christmas. We’re planning on releasing the remaining six episodes either at the end of the year or in early 2015. Basically, as soon as we finish editing. We all have full-time day jobs, so sometimes that takes a while. Plus, production always throws curveballs at the last minute, but that’s to be expected. The more things I can do to prepare before the pressure is really on, the more easily I’ll be able to dodge those curveballs. Or hit them, or whatever it is you do with curveballs. Are we talking about baseball here?

Oh, and if anyone owns or knows someone who owns a bar or restaurant in the LA area, please let us know!

Check out Introverts season one by clicking here.

I do like to socialize and go to parties, but I view that more like getting a haircut. It’s good for me, and I’ll feel better afterwards, but I don’t necessarily look forward to the process. Rachel Tucker