This is an excerpt from Introverts in the Church: Finding Our Place in an Extroverted Culture by Adam S. McHugh.

There is an ancient and beautiful monastic ritual called “The Grand Silence.” For centuries, at the conclusion of evening prayer, monasteries have called a full halt on speech, to be observed except in dire emergency. This silence endures through the night until the first prayers the next morning, when as the sun introduces the new day, the quiet is broken by the singing of Scripture.

I first encountered this tradition on retreat with several of my ministry partners while I worked as a college pastor. They were a fervent group of extroverts, and for them, the nighttime silence was less than “grand.” They squirmed their way through that first evening, contorting their faces every time they had a thought they had to stifle. By the second night, though, they started to enjoy it and acknowledge the value of the silence. If we’re honest, too much talking can be a slow leak on even the most extroverted soul.

For me, the lone introvert, not even the most haunting chants of the Psalms that resonated through the chapel at daybreak could compare to the transcendence of the Grand Silence. Monasteries may be homes of asceticism, but each night their members feast on a gluttonous banquet of quiet. I anticipated and relished those hours, often going deep into the night to savor the stillness. For my extroverted colleagues, the grand silence was a vacation; for me, it was a homecoming.

In the fifth century, Saint Benedict, father of the monastic way, instructed his pupils to keep regular silence: “Therefore, because of the importance of silence, let permission to speak be seldom given to perfect disciples even for good and holy and edifying discourse.” Benedict understood that the first roles of the disciple are to listen and learn. Words may not always be the tools of wisdom and reverence we would like them to be. Too often, they reveal immaturity and even ignorance.

Today Benedict’s exhortation to keep regular silence seems like an idea from another dimension, eccentric advice from an antiquated culture. The ears of our culture pound with words, polluting our audioscape with constant white noise. It often feels like our world is locked in a prison of words. Henri Nouwen did not exaggerate when he declared “Over the last few decades we have been inundated by a torrent of words. . . . Words, words, words! They form the floor, the walls, and the ceiling of our existence.”

Probing further, Nouwen laments that in such a culture, “who can maintain respect for words? All this is to suggest that words, my own included, have lost their creative power.” He penned those thoughts before the advent of the smartphone, a device that has carved channels of verbosity into our airwaves, so that satellite-powered text now bounces around the cosmos at terrifying speeds. As the rate of our words has increased, so has the pace of our culture as a whole. People scurry from one task to the next. Visual and audio stimuli of all kinds race around us. Moving images, graphics, colors and noise have become part of the very atmosphere in which we live and breathe. In fact, recent studies are showing that our technologies are actually remapping the circuitries of our brains, so that concentration for long periods of time is becoming more difficult. Many of us can relate to this author’s lament in The Atlantic:

Immersing myself in a book or lengthy article used to be easy. My mind would get caught up in the narrative or the turns of the argument, and I’d spend hours strolling through long stretches of prose. That’s rarely the case anymore. Now my concentration often starts to drift after two or three pages. I get fidgety, lose the thread, begin looking for something else to do. I feel as if I’m always dragging my wayward brain back to the text. The deep reading that used to come naturally for me has become a struggle.

I had a conversation recently with a respected professor of literature at a Christian college, who admitted that her phone has become an addiction for her, that she finds herself scrolling mindlessly through her social media feeds several times a day. When she once would lose herself in the great books she has devoted her professional life to, she now has to tear herself away from her phone, usually several times, to get through a few pages of prose.

Ours is an overstimulated culture, and an insidious side effect is that our inner worlds are atrophying. As our world becomes more and more driven by external stimulation and our lifestyles mirror the dizzying speed of our technology, we focus outward at the expense of the inward. We take leaps and bounds in one direction but drift from another, which can have the effect of alienating us from ourselves, others and God.

Introverts in the Church shows how introverts can live and minister in ways consistent with their personalities. Get your copy on Amazon, and wherever books are sold. 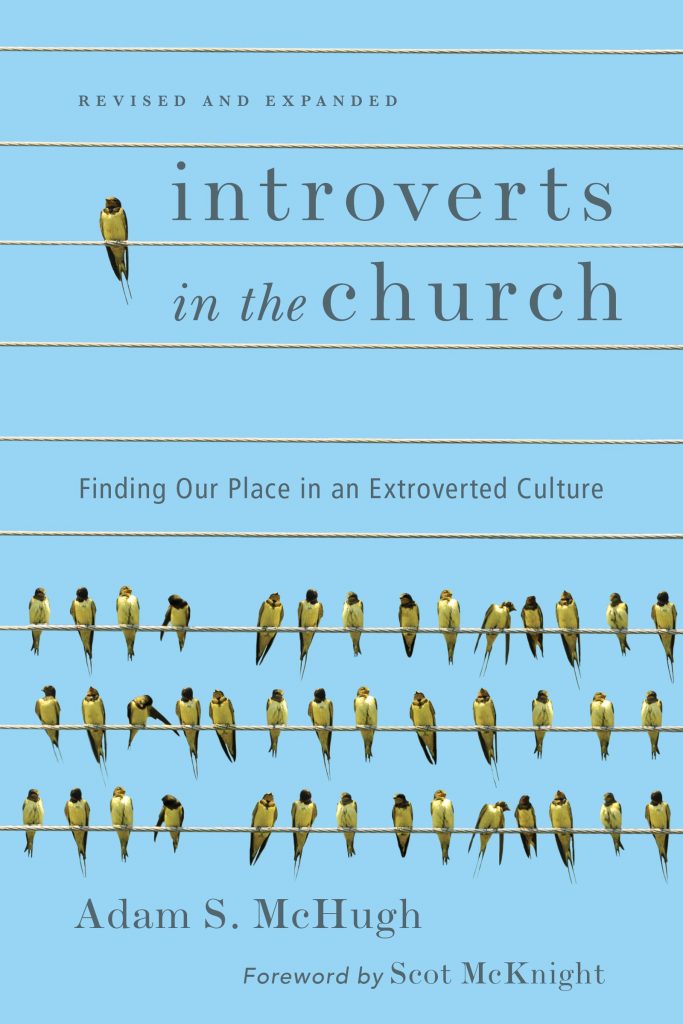 Read this: The Reason Socializing Drains Introverts More Than Extroverts

Adam S. McHugh is the author of Introverts in the Church: Finding Our Place in an Extroverted Culture. He is an ordained Presbyterian minister, spiritual director, chaplain, speaker, and retreat leader. He has been published in The Washington Post, The Christian Century, RELEVANT Magazine, Psychology Today, and Leadership Journal, among other publications. He is a graduate of Claremont McKenna College and Princeton Theological Seminary. On February 28, 2012 he served as guest chaplain in the U.S. House of Representatives. He lives in Santa Barbara, California.

Ways to Express Vulnerability as an Introvert

5 ‘Extroverted’ Jobs That Are Perfect for (Some) Introverts

An Introvert’s Guide to Building a Strong Morning Routine

5 Ways Introverts Can Help Balance Out Their Extroverted Partners

What I Am Teaching My Extroverted Child About Introverts