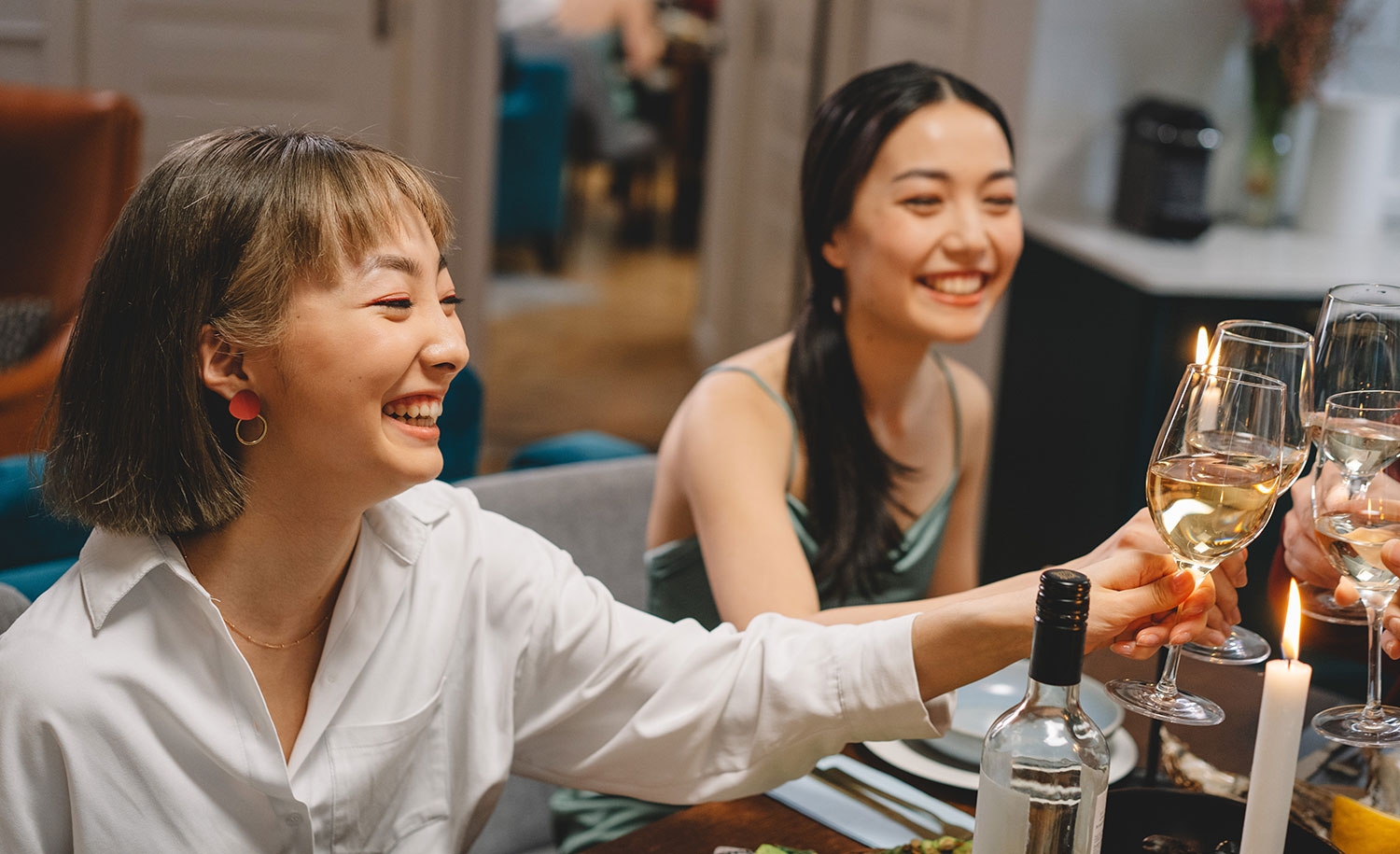 Parties usually don’t go hand-in-hand with introverts, but there are ways to make attending them more manageable — and actually fun.

There once was a time when I went to a party every weekend. But, these days, I only go to a few get-togethers a year. And, when I do, I am relieved that they are smaller than the ones of my, um… youth? What is early 30s? Is that youth if I’m 63 now? Or should I call it my “days of liberation after my divorce,” when I was determined to get out there and meet someone new?

Now, I’m an introvert, and parties don’t go hand-in-hand with introverts. One problem I have with them, for instance, is that often everyone is talking at once, and I don’t feel confident enough to speak unless there is a moment of silence in the room. So I will wait until the conversation is completely over before I mention my thoughts on something that occurred way earlier in the conversation.

This tends to make people question my sanity. (In their shoes, I probably would, too.) But that’s just how we introverts are wired — we need to think through our responses before we respond and actually say them out loud.

So the next time you head out to a party — either of your own accord or out of obligation — here are some of my best tips.

5 Ways to (Successfully) Attend a Party as an Introvert

1. When you’re passionate about a topic, jump in and join the conversation.

Yes, I know, introverts don’t just spontaneously “jump in” and join a conversation. But… we do when we’re familiar with the topic at hand (especially if it’s a small group of people).

To give you an example of this in action, I once was gathered around the table with a group of friends at a party. One woman began talking about her job at the front desk of a medical office, where she had to handle the urine samples people would bring in. Somehow, that discussion took off in a million other directions, with the big talkers in the crowd (hello, extroverts!) laughing and joking about something different. And when they were all quiet for a moment (likely taking a breath between their talking), I said, “Urine is the most beautiful thing under a microscope.”

They all looked at me, utterly confused.

They followed my eyes to see if there was something behind them that they didn’t see, decided I must be having delusions of urine or something, then burst out laughing again. It wasn’t until much later in the evening that I was able to explain to them that urine was the original topic of conversation, and that I had once worked in a lab, and when you look at urine under a microscope, it is a maze of intricately designed and colorful crystals. (Try it sometime!)

So, see, introverts? Our perspective of what is beautiful in this world can amaze (or stump!) others. You, too, likely have topics you’re familiar with, or passionate about, which will make it easier to join group conversations.

2. But when joining the conversation, don’t overthink it!

I’m sure I’m not the only introvert who’s hesitant to join a group conversation that’s already in full swing. I often ask myself: Am I mingling… or being intrusive?

I’ve noticed that those who have the true art of mingling down pat will just burst into the middle of a group with an exclamation about something totally irrelevant to the conversation. They’ll change the subject completely, much to the chagrin of those who were actually finding the former conversation interesting. But these people who can do this are so confident, they just know in their heart of hearts that people want to drop what they are talking about and hear what they have to say. (I envy that confidence!)

And then there’s me, hesitating and overthinking. I once went to a therapist who said I have a damnable habit of trying to second-guess what people are thinking. It’s true, because when I see people gathered in a circle talking, I ask myself, “Should I try to join that conversation, or would they prefer to keep whatever they are talking about between themselves? But, if I don’t join a conversation with someone, I’ll just be standing here in the middle of a crowd of people looking all sad and alone, and they will start talking about me and my sad aloneness.”

It’s honestly a catch-22. So walk up and enter the conversation — just don’t overthink it!

3. Have an escape route (or several) planned.

Okay, so with my urine conversation example above, I could have ran off the moment people responded with confused stares. But I didn’t. Yet this brings me to my next point: Always have an escape route (or several) planned. Just in case.

It’s times like these that I used to be happy that I smoked, and that smoking was no longer acceptable inside. What a relief it was to be able to step outside for a smoke and relieve myself from all those people in there, yet appear to still be a part of the party. In fact, I often found that I had some pretty good conversations with the other smokers, kindred spirits pretending to crave cigarettes when they really craved a lack of pressure to mingle.

But, alas, health awareness came up (or possibly just expense-awareness), and I quit smoking.

Now what would I do? Inch my way into a group circled around talking and listen like some sort of voyeur or creepy listen-inner? Wonder if they feel they have a secret and they don’t want to share it with me? Wonder if they will talk about me when I get nervous and walk away? When I turn away, will they see that my butt has gotten bigger? Let’s see, what else can I possibly feel insecure about! Maybe I’ll just start smoking again.

If you do make your way into the conversation, have some pre-planned escape routes planned, anything from having to use the restroom to getting an emergency text from a friend to needing a refill (or several) on your drink.

4. Have “reasons” why you must leave right now (especially when the host won’t take “Goodbye” for an answer).

One of the biggest problems for me as an introvert at any party is that I don’t want to stay as late as everyone else. Some of you might characterize it as having social overload. I want to leave, yet I dread having to figure out how to leave without people making a big deal out of it. (Or drawing attention to myself, which is even worse!)

Back when I was attending a party every weekend, Law & Order: Special Victims Unit was a fledgling show that was new and different and had sexy characters. So I would sit there at parties as the 10 p.m. hour approached and think that I would love to just be at home, munching on wonderful snacks friends made and watching the show by myself. Then I would have to master the outmaneuvering of the host’s obligatory goodbye.

See, while I feel an obligation to say “Goodbye” and thank the host, that means the host automatically assumes they are obligated to ask me to stay longer.

Some people have ready-made answers for why they need to leave early, especially couples. It’s, “We’re getting up early in the morning to drive to Timbuktu” (or whatever), but I just don’t like lying. (And the fact that I want to go home and watch Special Victims Unit just doesn’t cut it. It’s a solitary thing. God forbid anyone look forward to doing something alone!)

Even if they have ignored me all evening, the obligated host will say, “Oh, staaaay! We really haven’t had a chance to talk.” And then they will speak to me briefly, then say, “Don’t leave, I’ll be right back,” and run off to talk to someone else, and then I am standing there thinking, “Are they really coming back? Is that all there is?” And then I start humming Peggy Lee’s famous song (“Is That All There Is?”) to myself, wondering if it is okay to leave yet… or if I will have to do the same old goodbye all over again. Is that all there is? Is that all there is? If that’s all there is, my friend, then let’s… just go! At this point, I just sneak out.

So if you don’t want to just (very awkwardly) sneak out, have some excuses/reasons on hand, just like that hypothetical couple does.

5. Be discerning — it’s okay to choose the introvert-friendly parties over the big, loud ones.

Personally, if the crowd is big enough, I think sneaking out works well for me. But, as my friends get older, they seem to be catching on to my lack of enthusiasm for big crowds, and I think they’re liking smaller crowds, too. And this has worked out best for me.

Recently, I happened to be invited (by those same people) to a smaller gathering. There were chairs and tables spread around in a manner where everyone in the room could see everyone else and have a nice conversation without ever having to leave their seat. It was the best party I have attended in a long time.

Friends, please keep it small (and introvert-friendly) — otherwise, I may skip it. And please don’t expect me to reciprocate by inviting people to my house. I would end up cleaning for days and never stop seeing faults in every nook and cranny… and then I would be expected to be the one to try to entertain people rather than just sit back and watch… and I would be expected to be the one who begs people to stay (even though I’ve had enough of my own party).

I just can’t do it anymore. Meanwhile, I’ll attend your party — and try my best to make it a success.

I am a freelance journalist who spent 16 years writing for her local newspaper and has written occasional articles for publications like Homestead Magazine and Wonderful West Virginia Magazine. I have a book that you can download for free at Lulu.com titled, Ooops, Memoirs of a Cat Loving Home Repair Addict. (Don’t forget, my title has 3 “o”s in Ooops.) I have a master’s degree in English from Hollins University, and I teach ESL (English as a Second Language) classes online.