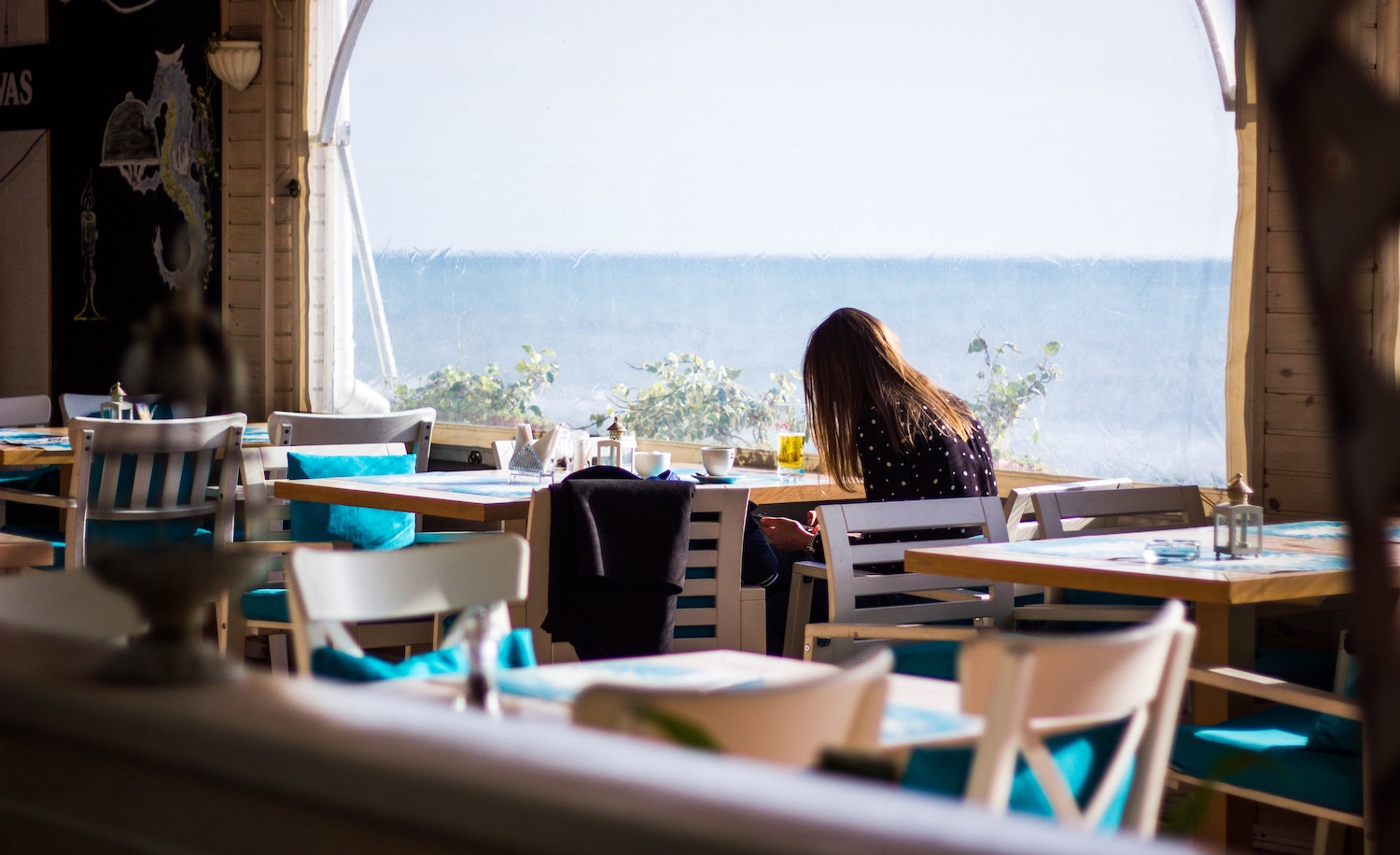 Being alone in public doesn’t make you a loser. Skeptical? One introvert flies solo for a night to prove it.

“How many?” The hostess stares at me intently.

I gulp. Every single head in the crowded restaurant does a robotic swivel awaiting my response, beady eyes boring into mine, mouths posed to smirk. I’m clearly alone standing in the entrance. Nobody will be joining me tonight. A giant, sparkling red arrow materializes above my head, indicating that yes, a loser has entered the building.

I sigh. “Just one.” An explosion of laughter erupts. Peanuts are thrown. Fingers are pointed. Obscenities are uttered. Every person I pass on the way to my table flinches away, as if being alone is contagious. Before I can even reach my seat, a ginormous hole forms beneath my feet, and I’m swallowed into the depths of the earth forever.

At least that’s how I imagine going out by myself in public feels. Because I, like many people, have a real fear of being alone in a traditional group setting — even though I’m an introvert who loves solitude. It reminds me of the sinking feeling in the pit of my stomach I got in grade school as the kickball team captain called out names that weren’t mine. Standing there with my twiggy arms and legs, the faces of my peers staring back at me, I felt like the word loser was stamped on my forehead because nobody wanted me.

And when I first came to college, I had to eat the same thing alone in my room every day because I was too scared to go to the dining hall when my only friend was busy. I feared the stamp had turned into a tattoo and that everyone would know I was a loser because I was by myself.

Is Lonely the New Leprosy?

According to a large-scale 2018 loneliness study conducted by Cigna, one of the largest health insurance providers in the United States, only 27% of Americans feel that they belong to a group of friends. And only 24% claim they can get companionship when they want it. So the majority of us don’t exactly have a large reserve of friends on hold.

We do, however, have a crippling fear of being judged for having no friends. “Inhibited from Bowling Alone,” a study published in the Journal of Consumer Research in 2015, found that people generally anticipated less enjoyment from doing an activity alone in public, such as watching a movie, than doing that same activity alone in private. A large part of the reason is most people think others will assume they have few friends if they are spotted alone in public. But that same study also revealed that people end up enjoying themselves while alone in public just as much as they do alone in private.

“What we think is that people are anticipating that others will be judging them as not very socially connected when they’re by themselves out in one of these public venues,” said University of Maryland Professor of Marketing Rebecca Ratner, author of the study, “but that when people are actually having the experience, they may not be thinking so much about what others are thinking of them.”

Now, this makes sense to me. I’m an introvert who craves alone time. I’d rather be snuggled up in a chair alone — or perhaps with a cuddly cat — watching a true crime documentary than out amongst other people pretending I’m having fun. So maybe it would actually be kind of nice to enjoy a night out on the town without having to fake a smile or force a laugh.

What Happened When I Took Myself Out — Alone

With all of this in mind, I decided it was time to put this theory into practice. With “Forensic Files” on pause for the night, my alone time would now be the spectacle — or so I feared. My goal was a date-night vibe, a casual restaurant where my sweater and jeans wouldn’t draw any extra attention, followed by a movie. I chose a local brewpub near work. The sun was still out and shining at 5:15 p.m. when I arrived. I was thankful for my decision for an early supper so that I didn’t have to walk around at night and get kidnapped — did I mention I watch a lot of true crime?

Pepper spray clutched firmly in hand, I walked confidently into the restaurant, bracing myself for an awkward encounter with the hostess. Instead, she simply asked, “How many?” I replied, “Just one.” Nobody looked at me or even noticed I was flying solo, and not a single peanut was flung my way.

I was led to a secluded area of the restaurant where one other lone girl was seated, casually ordering appetizers and drinks like there was nowhere else she’d rather be. And what do you know — I didn’t immediately have the urge to point at her and chant nah nah nah nah boo boo because she was all alone. I’m an adult now, and I appreciated a fellow comrade-in-arms fighting against the stigma of being alone — a stigma that’s largely perpetuated inside our own minds.

Because according to a study by Bella DePaulo, a social psychologist specializing in the single experience, the fear of being judged is all in our heads. Sure, there’s the occasional judgmental jerk who comes along, but DePaulo found that couples eating together received the same amount of negative judgments as a person eating alone. And the loner was just as likely to be seen in a positive light as those dining with a companion. DePaulo has also found that people are increasingly learning to enjoy their time alone.

“More and more people are craving solitude and savoring it when they have it,” DePaulo said in an email. “Sure, there are people who feel lonely when they are alone, but there are also people who embrace their time alone and are greatly enriched by it.”

People like the new-and-improved me. I now settled comfortably into a booth, thankful to be away from nosy and noisy people enjoying happy hour on the other side of the restaurant.

Left to My Own Devices

5:30 p.m. “I’ll have the cranberry club, please.” Wow, it’s so nice that I don’t have to wait for other people to browse the menu to place my order. This is so much faster; people are such a nuisance.

5:31 p.m. Is this where they bring the loners? Maybe it really is contagious…

5:32 p.m. Do I look like I’ve been stood up? Maybe I should pretend that’s the case and try to swing a free meal out of the deal.

5:33 p.m. The loner girl ahead of me looks very familiar. Is my brain already desperate for human connection?

5:35 p.m. Whoa, the food is already here. I’ve already forgotten the name of anyone I’ve ever loved.

5:50 p.m. This is the point in the meal where I would typically ask my companions if I have anything in my teeth. Although, I’m not going to see anyone tonight, so fly free, food particle.

5:51 p.m. Casually paying for myself. I’m a feminist anyway, so there’s nothing wrong with paying $20 of my hard-earned cash to treat myself to a nice meal.

Next up: a three-mile drive to the closest movie theater for a showing of the live-action Dumbo (who, ironically, did have peanuts flung at him). The theater doubles as a restaurant, so I finally ordered the dessert I’d been craving. There were only a few other people spread out throughout the theater, so I felt pretty isolated in my little corner. Sitting alone at a movie feels a lot more natural than at a restaurant since you’re normally silent during a movie anyway, so I didn’t feel judged or uncomfortable at all by myself. I felt a little awkward talking to the male waiter who kept checking in to see if I wanted anything else to eat or drink, but that’s more likely due to my general fear of boys.

Despite poor reviews, Dumbo was a very enjoyable experience for me. My eyes misted over at a couple points, which, thankfully, no one was around to see. I laughed, I cried, I rooted for the CGI elephant as if it had real feelings. And then I walked through the attached mall alone back to my car — key clutched firmly in hand as a makeshift weapon.

Back safely in my cozy chair at my apartment with some Netflix true crime queued up, I felt fulfilled. No hole ever appeared to swallow me into the ground. Not one single smirk was passed my way, and I obviously was not kidnapped (I may or may not be writing this at gunpoint).

With none of my main fears brought to fruition, I was happy with how my solo date had turned out. It felt really cool to have the confidence to do something alone, and I was proud that I had been able to experience a pleasant evening out by myself. I would even do it again — once my wallet, short $40 and complaining in my pocket, recovers.

Now if only I could have gone back to mini-me on the kickball field and let her know that someday, being alone would be empowering. Then I’d tell her to stick her tongue out at those jerks and move on with her life.

Ashley Flaws is a college student studying journalism at Drake University, where she has discovered how deep-seated her introverted nature is. While other college students enjoy going out or partying it up, you can typically find her snuggled up inside alone watching true crime, cuddling with her fat cats, or reading a book. Her work has been published in Allrecipes Magazine and on teenvogue.com.