What Is the Big Five Model? 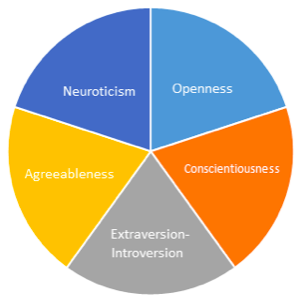 The Big Five model or the five-factor model (FFM) consists of five basic personality traits. Psychologists define an individual’s personality type based on these five dimensions.

What Are the Five Basic Personality Traits?

The five basic traits are often referred to as “OCEAN”: Openness to Experience, Conscientiousness, Extraversion/Introversion, Agreeableness, and Neuroticism.

This trait measures if you are open to new experiences. In other words, it measures how much someone shows an appreciation for excitement, adventure, and unfamiliar things. Someone who shows openness to experience will often display a preference for diversity in activities over routine. For example, if you like trying a new restaurant every time you go out for lunch — rather than returning to your three favorites — you might be high in openness to experience. Although this can lead to a lot of interesting, novel experiences, someone who scores high in openness may also be considered impulsive and lacking focus. Those who receive low scores can be perceived as perseverant, pragmatic, and fact-driven — but sometimes close-minded.

This trait measures whether you are organized, reliable, disciplined, and dutiful. Conscientious people would rather make plans than be spontaneous. The meeting will be from 2-2:35 next Tuesday? Great, it’s on their calendar. However, those who receive a high score may be perceived as inflexible. Those who receive a low score can be seen as open but perhaps a little unreliable.

As an introvert, you already know that this trait measures whether you gain energy from the company of others or from being alone. Extroverts tend to seek stimulation from others while introverts thrive in more low-key settings and tend to appear more quiet, calm, and thoughtful. Those who receive high scores may be perceived as team players or attention-seekers. Those who receive low scores might be seen as reserved, private, and reflective.

This trait measures whether you are sympathetic and cooperative versus distrustful and antagonistic toward others. Basically, it’s just how it sounds — it lets an employer know if a person is considered to be agreeable. Those who receive a high score are perceived as well-tempered but possibly naive or submissive. Those who receive a low score may be seen as competitive or argumentative.

This trait measures if you are inclined to experience unpleasant emotions easily. It also measures the degree of emotional stability and impulse control you possess. Those who receive a high score are usually perceived as stable or calm. However, such individuals can also be viewed as uninspiring or indifferent. Those who receive a low score may be seen as mercurial or easily excitable. However, such people are also often viewed as dynamic.

How Can I Prepare?

There is no one trait employers are looking for in a candidate. Different traits are needed depending on the position you’re applying for and the company’s culture. However, it’s still important to be prepared if an employer presents you with a Big Five personality test. Candidates who don’t seem to show any specific characteristics of the Big Five traits can be looked at as “plain.” Check out this Big Five personality test prep pack for practice tests and in-depth answer explanations. You can also compare your results to specific traits desired for certain professions. Preparing in advance can help you feel more at ease if you have to take a personality test on interview day.

Read this: 7 Ways You Might Be Using Personality Type Wrong

Learn more: Quiet: The Power of Introverts in a World That Can’t Stop Talking, by Susan Cain

Jennifer Feldman is a speech and language expert and blogger for JobTestPrep. She specializes in writing about the employment hiring process.

11 Introvert-Friendly Activities That Are Perfect for a First Date

3 Ways for Introverts to Get Rid of Social Anxiety

Why Introverts Find Strength in Silence

7 Ways to Micro-Recharge as an Introvert

3 Lessons My Introverted Grandfather Taught Me

5 Reasons Why Train Rides Are So Calming for Introverts